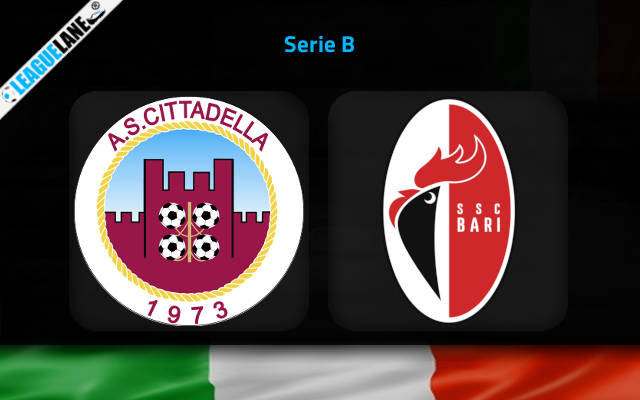 Cittadella vs Bari Predictions and Free Tips from our expert tipsters when the teams go head-to-head in Serie B on Thursday, 8 December 2022.

Things are not looking good for Michele Mignani’s side as the last five games have ended in a stalemate for them. Bari supporters are growing restless as more than 50% of their matches have ended in draws this season.

At the same time, Cittadella celebrated their fourth victory of the season as they edged past Genoa.

Both teams will be meeting after a period of four years. Cittadella are unbeaten at home in their last four meetings. The visitors have won only once in the last five overall head-to-head encounters.

The last two consecutive matches between these two teams have ended in a stalemate.

Who will win the match between Cittadella and Bari?

Cittadella have better chances to win this fixture. The main reason being that despite being at the bottom half of the table. They have won two games in their last five outings. Including an impressive 1-0 win over Genoa.

The visiting Bari have lost their consistency this season. They have a poor form as they are winless in their last eight outings.

We can expect over 2.5 match goals combined. The main reason is that the previous record shows that in two of the last three overall meetings at least three goals have been scored combined.

This fixture rarely lacks goals. Both teams have scored in three of their last five overall head-to-head meetings. Therefore, we expect the same trend to continue this time as well.

The visitors are facing a winless drought since early October. They have lost their winning momentum. At the same time, the host are unbeaten in four of their last five outings. Therefore, the first tip is that Cittadella will win by 2-1 – the odd for this tip will be at 10.00 odd.

Our second tip is that Both teams to score priced at 1.95. The last encounter between these two teams ended in a 2-2 scoreline.