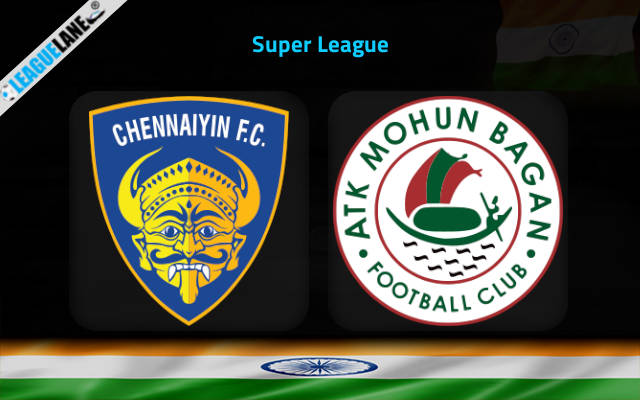 ATK Mohun Bagan is third in the league within the Play Off zone. They are unbeaten since the last 14 games and has never a tasted defeat this year. Chennai lost 4 times from the last 5 league fixtures alone and they last saw a win was 7 games back. With 14 points and 4 places apart, they two go heat to head at Tilak Maidan Stadium this Thursday for the 19th round of ISL.

The Mariners are at the 3rd spot on the standing with 34 points. From the 18 games played, they won 9 times in the league while drawing on 7 and losing only on twice other fixtures. They have scored a total of 36 while conceding a sum of 25 so far in the league.

ATK won the previous fixture by 2 goals to nil against Bengaluru FC ending their back to back league draws. They have scored 10 times while their defenders saw 4 goals go past them from the previous 5 league fixtures.

On the other hand, Chennaiyin FC is at the 8th position on the table with only 20 points in hand. Of the 19 matches played, they won and drew 5 games each while losing on 9 other occasions. Their total goals to conceding ratio stands at 17:34 showing their poor defensive structure.

Chennaiyin FC lost the last game against Kerala Blasters by 0-3. They conceded 15 goals from the opposition from the past 5 league schedules while failing to climb onto the scoreboard in 3 of them.

Previous matches between the two have averaged 1 goals while BTTS has happened 33% of the time. We feel that ATK will win this Thursday, as they are unbeaten in the last 14 ISL fixtures. Meanwhile, Chennaiyin lost the last 2 games in a row and having denied a win in over 7 games.