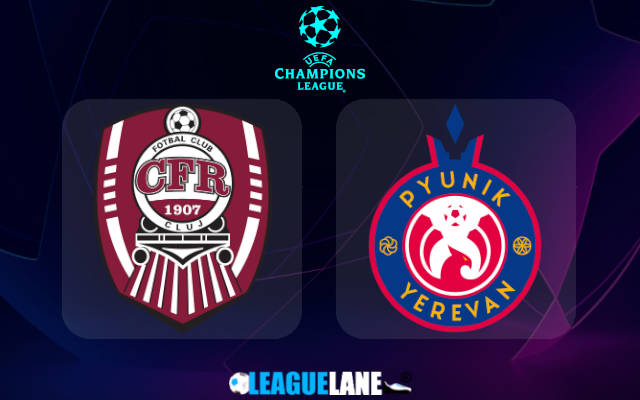 CFR Cluj play host to Pyunik in a match of their second-leg of Champions League Qualification. After their tied result in the first-leg these two sides will be seen crossing swords at Stadionul Dr. Constantin Rădulescu, this Wednesday.

With last week’s first leg having ended goal-less tie at Republican Stadium, it’s winner takes all in Armenia. It was the visitors that made more goal attempts and shots on target in that game and the hosts was completely defending, eventually making a 0-0 tally.

The Railwaymen won their 8th Romanian league title last season, crowned Liga 1 champions at the conclusion of each of the last 5 campaigns. They got as far as the third qualifying round last year before they were beaten by Young Boys.

CFR Cluj have never lost in the first round of Champions League qualifying before. Their most recent results show that much respect should be given to the defense. The hosts have been miserly, resulting in the total number of goals that have gone in at their end over the course of their previous 6 games stands just 4.

On the other side, Pyunik are the record 15-times champions of Armenia, regaining the title for the first time since 2015 last season. In Europe, they’ve never gone beyond the third qualifying round.

The Armenian side now come here on the back of two consecutive ties. They have even struggled for goals over their previous 6 clashes, recording a poor return of just 4. In those fixtures, Pyunik have also seen the overall goal tally against them equaling to ten.

While analyzing the games of both sides, leading up to this second leg, there exists a pattern in the number of goals scored at both ends. CFR Cluj has kept a clean sheet in 4 of their last 6 wins at home, scoring under 3 goals in each of those 4 fixtures.

Pyunik also comes into this tie with under 2.5 goals seen in 7 of their last 9 games. This is a very consistent pattern displayed in both sides’ recent forms now.

So, Cluj are big favourites to claim the required result here. The winners of this tie will take on Dudelange or Tirana in the Champions League second qualifying round.