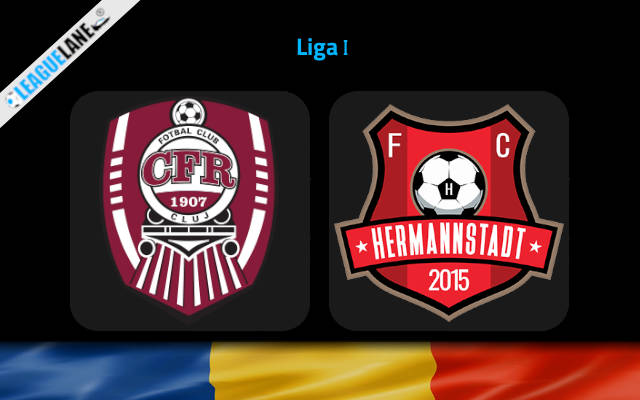 CFR Cluj vs Hermannstadt Predictions and Free Tips from our expert tipsters when the teams go head-to-head in Superliga on Tuesday, 20 December 2022.

CFR are going strong in the league this season. They are just one win away from reaching the top of the table. They defeated rivals FCSB in their last league outing.

Hermannstadt shocked everyone as they defeated league leaders Farul by a huge 4-0 margin most recently. Silviu Balaure scored a brace in that important victory. The players are full of confidence ahead of this fixture however they will have to be cautious against CFR.

CFR won this fixture back in November in a 3-2 thriller. They are unbeaten in the last seven head-to-head meetings since 2018.

The visitors are yet to celebrate a victory against CFR. Moreover, the host are on a six-game winning streak at home.

Who will win the match between CFR Cluj and Hermannstadt?

CFR Cluj have a better chance to win this fixture. The main reason is that the visitors have not won a single game against them in the last four years. Moreover, they have not won an away fixture since the 14th of November.

Out of the last three head-to-head meetings at Stadionul Dr. Constantin Rădulescu the visitors have scored only one goal which was over three years ago.

CFR Cluj won both halves in their last two victories at Stadionul Dr. Constantin Rădulescu against this team. Moreover, when both these teams played back in November the same trend occurred. Therefore, the first tip is that CFR Cluj will win both halves– the odd for this tip will be at 2.50 odd.

Our second tip is that Over 2.5 goals will be scored – at 2.40. The host have scored at least two goals against this team in three of their last four victories since 2019. Do also note that the most recent encounter between these two teams ended in a 3-2 scoreline.