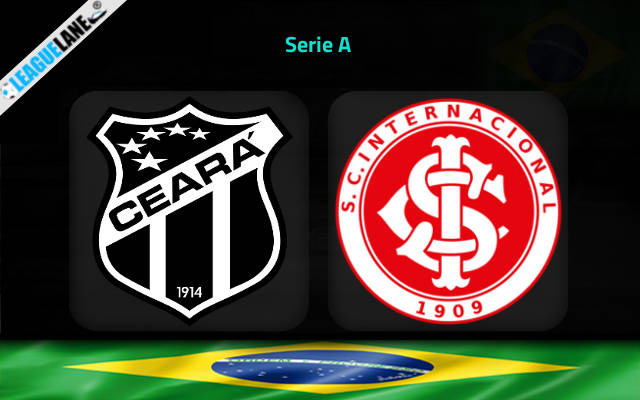 Matchday 15 of Brazil Serie A is set for this Saturday as Ceara host Internacional where both these sides are separated by 11 places and 5 points. These two sides will be seen locking horns at Castelão in Fortaleza.

Internacional is at the 4th spot on the standing with 24 points from 14 games. They won and drew 6 times each in the league while having lost twice other occasions. The visitors come into this on the back of 3 victories in their last 4 matches as they sit inside the automatic Libertadores qualifying spots.

Since being beaten by 0-2 in their last game against Colo-Colo in Copa Sudamericana competition, Internacional will be hoping to turn things around here. Over the course of their previous 6 outings, the visitors have bagged a tally of 13 goals. They have also not failed to score in every single one of those games.

On the other side, Ceara resides at the 15th position on the table with 17 points. Of the 14 matches played, they won and lost 3 times each in the league while having drawn on 8 other occasions. Things have not been going that well in front of goal for them recently, with the side failing to score in 2 of the last 5 games.

Ceara come into this on the back of a 1-1 draw with Atletico Goianiense last weekend. The home team begin this weekend’s round of fixtures with 4 frustrating draws in a row.

Internacional haven’t been defeated in their previous 6 league matches away from home. They also remain unbeaten in their last 4 h2h meet-ups with this rival. Moreover, they are the third best away team this season, losing only once in the last 7 games played on road.

Meanwhile, Ceara haven’t won at home in the past 7 league matches. They remain as the only side to not secure a win at home and are considered as the worst home side this season. The hosts also haven’t beaten Internacional in their previous 4 matches in the league.

Knowing that, we expect Internacional to seal a win this Saturday.