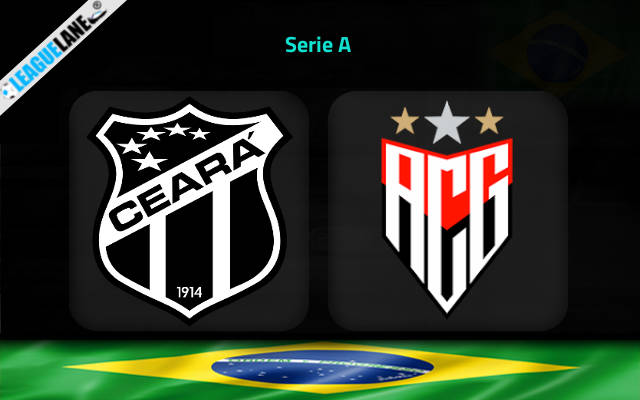 Gameweek 14 of Brazil Serie A is set for this Sunday as Ceara host Atletico GO where both these sides lie one below the other sharing same points. These two sides will be crossing swords at Castelão.

Atletico GO is at the 12th spot on the standing with 16 points from 13 games. They won and drew 4 times each in the league while having lost on 5 other occasions. The visitors currently occupy the last spot of Copa Sudamericana promotion and will be aiming to climb further up the table.

In their previous game, the visitors settled for a goal-less draw in the Copa do Brasil match with Goias. But they won their last league fixture by 3-1 against Juventude. Jorge Jorginho’s men have fired home a total of 9 times throughout their latest 6 matches.

On the other side, Ceara resides just below them at the 13th position on the table with 16 points. Of the 13 matches played, they won and drew 4 times each in the league while having lost on 5 other occasions. The hosts have seen drawing games unnecessarily, with 4 out of the last 5 games have ended on ties.

Ceara will be hoping to bounce back here after a 0-2 Copa do Brasil loss in their previous game against Fortaleza. They have given the opposition little, with the tally of goals that have gone past their goalkeeper over the course of their past 6 matches stands at 4.

Ceara remain unbeaten in the past 9 league games. They also come here on the back of 6 straight unbeaten record at home ground. Moreover, the hosts haven’t lost in the league to Atletico GO in their previous 2 games.

Meanwhile, Atletico GO won only once from their last 5 away league fixtures. They also won just one away game in Serie A this season.

The hosts have kept 3 clean sheets in the last 5 games and their consistency at home backs us to root for Ceara. We therefore, predict a home win this Sunday.