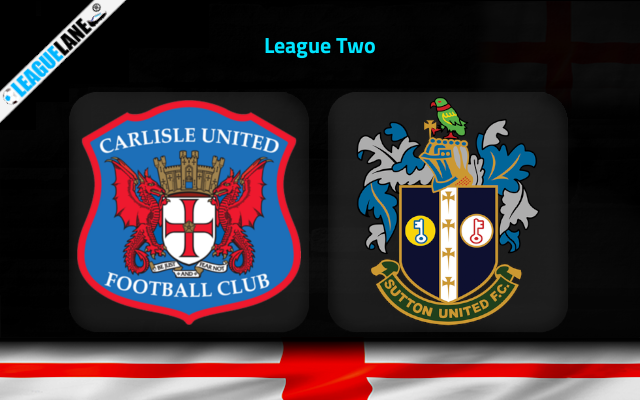 Nearly 50% of the matches have ended in a defeat for Sutton this season. They got their much-needed win when they defeated Rochdale most recently. Matt Gray and his men will now look to extend this streak as they will play against Carlisle at Brunton Park.

The visitors played a great game last time as they got all three points in their 1-0 win over Rochdale. Will Randall scored the only goal in that game. The team is currently in the seventeenth position following this win.

Meanwhile, the host have an unbeaten streak of four games. They defeated Salford City by a huge 4-1 margin recently. Kristian Dennis scored a brace in that game.

They began this month by holding Harrogate Town in an exciting 3-3 thriller. This result was very crucial for Paul Simpson’s side as it took them to the sixth spot on the table ranking.

The supporters of Sutton are growing restless as the lack of winning performances is affecting the team’s mentality. They have struggled against top teams this season.

Despite losing nine games till now the team are not in the relegation zone. The credit for this achievement goes to the defensive backline.

You can back the following, as our first tip for this game is that Carlisle will win this game by 2-1 – the odd for this tip will be at 9.00. It is important to note that the visitors are on a two-game losing streak in their away fixtures. Moreover, they have lost nine games till now.

At the same time, the host are on a four-game unbeaten run.

Our next tip for this game is that Kristian Dennis to score anytime – the odd for this tip will be at 2.50. He scored a brace against Salford City recently. Not to mention that he is the top scorer for Carlisle this season.