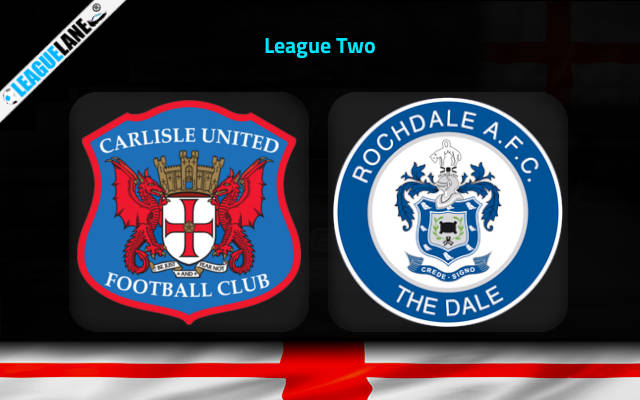 Carlisle United is just a spot away from falling into the relegation zone while having 8 points more than Rochdale who are more aligned towards the middle of the table. Since both teams won the previous league fixture, they fall into this upcoming meeting with a winning mentality. A home victory is crucial for the hosts in order to escape from the red zone, as they invite the guests to Brunton Park this weekend.

The Blue and White Army reside at the 21st position on the table with only 19 points. They won on 4 games while drawing on 7 and losing on 10 other occasions. Their total goals to conceding ratio stands at 15:29 by getting involved in 22 league matches.

Less than 3 goals per match were seen in 5 of the last 6 fixtures where Carlisle United have been involved. Their opponents scored a total of 6 while they themselves managed to get a sum of 5 from those 6 games.

The Dale is at the 14th spot on the standing with 27 points from 22 games. They won 6 times in the league while drawing on 9 and losing on 7 other occasions. They have the same goals to conceding numbers at 30:30.

Robbie Stockdale’s Rochdale have netted a total of 9 from the prior half a dozen games. After suffering back to back defeats, they won at home in the last league fixture against Newport by 2-0. Carlisle also won the previous league game by 2-0 against Stevenage.

It appears that a draw is up on the cards as Carlisle United are in poor form in England League Two as they won only 2 home games at Brunton Park. The Dales are also in a mixed form this season with only 3 away wins.