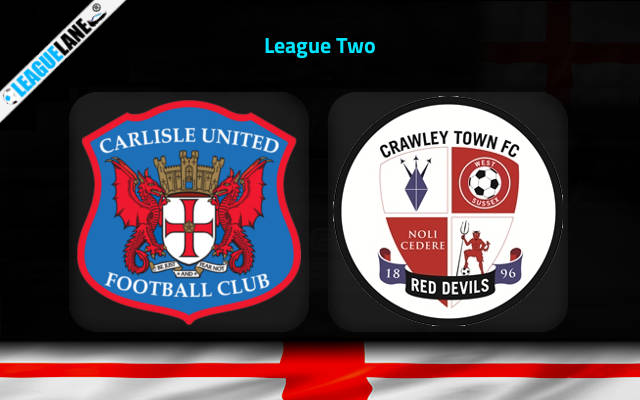 Carlisle with brilliant results in recent fixtures have put themselves well clear of the relegation zone.

Crawley have also been delivering brilliant performances in recent games and as a result, have climbed up to the top half of League Two.

Expect a closely fought contest when these two clubs lock horns at Brunton Park this Saturday afternoon in a League Two fixture.

The Cumbrians on the last match day sealed a comfortable 2-0 win against Bradford City at home.

This marked the club’s fourth win in five league fixtures. Thus taking twelve points out of a possible fifteen from those fixtures, the club now is 19th in the league table, six points clear of relegation.

Thomas Nichols scored the only goal for Crawley in their most recent fixture as the club won 0-1 away from home against Northampton.

This was the club’s 3rd consecutive win as they now sit 12th in the league, four points behind a spot in the playoffs.

The Blues have won just twice in their last five home fixtures across all competitions. With that being said the record is not shabby for a team in the last quarter of the division.

However, their opponents on the other hand are undefeated in their last four fixtures on the road, managing wins in three games among them.

This along with their overall better performances in the season when compared to their opponents makes it hard to go against them. Hence I have backed a double chance in favour of the away side.

The hosts have scored just three goals in their previous seven league fixtures at home. It would be surprising if the club manages to score more than once this Saturday.