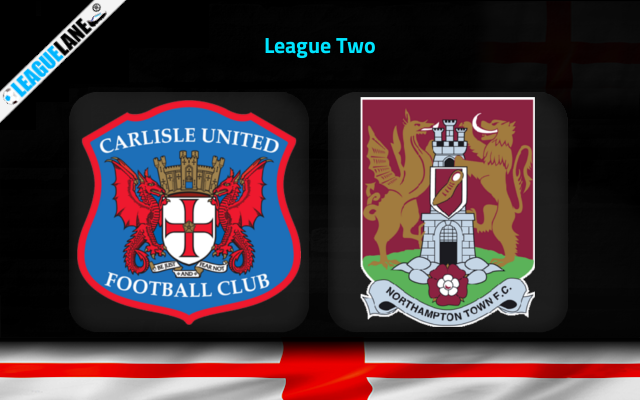 Carlisle United with brilliant results from recent league fixtures have managed to find a position 6 points clear from the danger zone. They have collected 10 points from the past 5 league fixtures to add up to a total of 37 points on the table. Anyways, they have a weak defensive and offensive lineup.

They have recorded a win in their most recent league fixture against Oldham on road. They have scored two goals in that match while leaking one. With that win, they are now following a thread of three straight winning games.

Meanwhile, Northampton Town remains at the second spot with a total of 60 points. They have been showing some inconsistency in the league lately. However, they have a good defensive and offensive side.

They have won their most recent league fixture against Tranmere at home. The match ended in a 3-2 full-time score. The above win was recorded after three consecutive winless games in the league.They will be hoping to make this win count for gaining back their consistency.

By the looks of things, we can expect a tight encounter between these two outfits when they meet each other at Brunton Park on Saturday in a league Two fixture.

Carlisle are on the track of improvement. They will be having some competitive spirits on the back of their recent recordings. We can expect them to leak goals from the opposition for sure.

On the other side, Northampton are winless at road since three league games. They have only won once in the past 6 league outings. Also, they have only scored four goals over the course of those fixtures.

Therefore, we expect them to end up this fixture in a score draw. A deadlock is an ideal option instead of backing Carlisle United or Northampton Town.