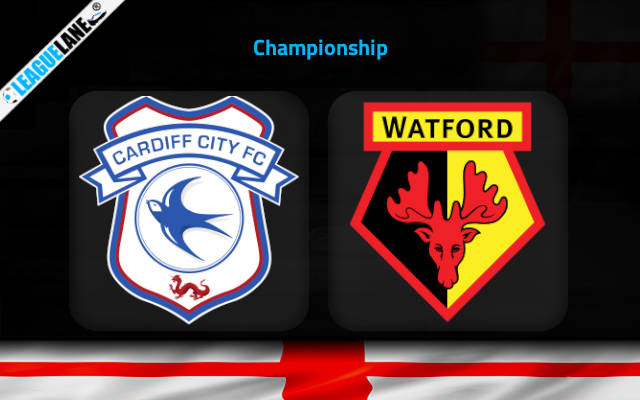 Cardiff got their much-needed win when they defeated Rotherham by 1-0 most recently. Now, they have a huge challenge ahead of them as they will play against Watford at Cardiff City Stadium.

Following their 3-0 defeat against Millwall, the visitors’ trajectory have gone up. They won their seventh game of the season when they defeated Wigan Athletic by 1-0. They have won two games back-to-back. Now the team is just one win away from reaching the top four on the table.

The main problem for the host is that they are conceding goals 1.12 goals per game, this is one of the reasons why they have lost eight games this season.

Against Swansea and QPR the host picked up two red cards, this aggressive approach have costed the team six points.

A second-half goal from Jaden Philogene was enough for the host side to secure all three points when they played against Rotherham most recently.

This victory comes after three back-to-back defeat. The team is now at the seventeenth position on the table following this result

Do note that, Callum Robinson will be available for selection ahead of this match.

Nearly 47% of the matches have ended in a defeat for the host this season. At the same time, the visitors have kept two consecutive clean sheets.

You can back the following, as our first tip is that Watford will score Over 2.5 goals – at 6.50 odd. This is after considering that in two of the last three victories the visitors have scored at least three goals against Cardiff.

Moreover, our next tip for this game is that Both Teams to Score – at 1.83 odd. It is very rare for a goalless match whenever these two sides have clashed. Both teams have scored in the last eleven consecutive meetings. We can bet on this trend to keep up this time as well.