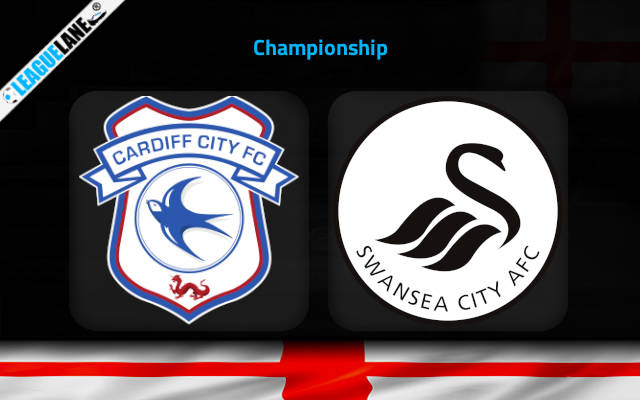 With only 2 points and no places apart, Cardiff who are on 4-game unbeaten run will host the Swans at Cardiff City Stadium this Saturday for the 40th round of EFL Championship.

The Bluebirds are at the 17th spot on the standing with 46 points from 38 games. They won 13 times in the league while drawing on 7 and losing on 18 other occasions. Cardiff City have spent 1,248 minutes trailing in Championship matches this season, 177 minutes more than any other side in the league.

Cardiff City will be looking for a repeat result of the 2-1 Championship success versus Stoke City. They have only scored one goal in their last 6 league meetings with Swansea, with that goal coming via Aden Flint in a 1-0 win in March 2021.

On the contrary, Swansea resides just above them at the 16th position on the table with 48 points. Of the 37 matches played, they won 13 games while drawing on 9 and losing on 15 other occasions. The Swans have gained an average of 0.95 goals scored in their away games in Championship.

In the game prior to this, the Swans settled for a goal-less tie with Birmingham City. Throughout their 6 previous matches, Russell Martin’s men have turned their attacks into goals 9 times, giving them a goals per game average of 1.5.

Following their 2-0 win at the Cardiff City Stadium in December 2020, Swansea are looking to win consecutive away league games against rivals Cardiff for the first time since November 1997.

Coming into this one, Cardiff City are undefeated in their last 3 home league matches. Their previous 2 h2hs at Cardiff City Stadium made the home supporters unhappy.

Meanwhile, Swansea remain unbeaten by the Bluebirds when they’ve played them away from home in the last 2 league games. We therefore feel that a double chance for the away side is highly likely to happen this weekend.