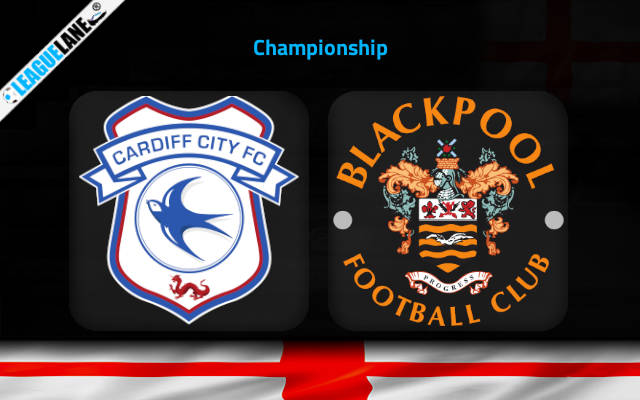 Cardiff City vs Blackpool Predictions and Free Tips from our expert tipsters when the teams go head-to-head in the England Championship on Saturday, 17 December 2022.

Cardiff City will be hoping for a better result here following a 2-2 draw against Stoke City in their previous Championship outing. They are currently at 19th place in the league standings.

Meanwhile, Blackpool is having an unimpressive form since the beginning of this season. They extended their winless thread to five games after recording a goalless draw in the latest Championship meeting against Birmingham.

Cardiff City is having a three-fixture unbeaten streak against Blackpool. Three of the last five meetings had goals from both ends.

At this venue, the visitors are having a winless form for three games against Cardiff City. The latest encounter had finished in a 1-1 draw.

Who will win the match between Cardiff City vs Blackpool?

Neither of these two teams are having a decent form at respective patches currently. Cardiff is having a three-fixture losing streak at home while Blackpool lost the last two road trips.

Cardiff City have a slight advantage when looking at the recent h2h clashes and the current overall form. Therefore, we expect a victory for them on Saturday.

Neither of these two teams have a strong defense. Also, affairs including Blackpool and Cardiff have seen goals over 2.5 ft lately. In that case, expect over 2.5 goals ft in this fixture.

Both the teams are in possession with a defense which is not capable of keeping a clean sheet. Do also note that they both have been scoring goals consistently in the past few matches.

Therefore, expect goals from both ends of Cardiff City Stadium on Saturday evening.

Cardiff City is having a better form when compared with the h2h and overall stats of Blackpool. Hence, we like to back Cardiff City to win at 1.85 odds as the main bet.

As an alternative, we like to place the both teams to score option at 1.91 odds as both these sides are capable of scoring at least one.