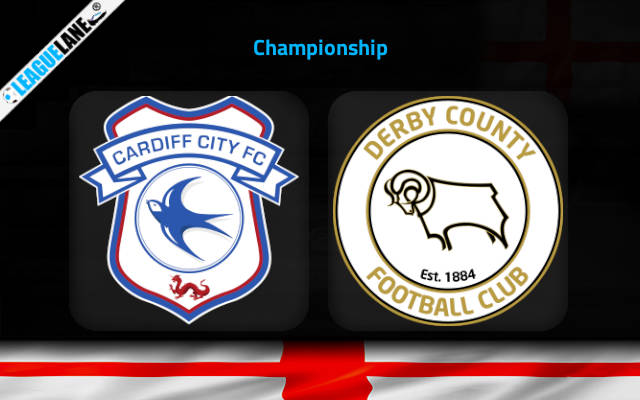 Derby County will be looking for salvation points on Tuesday evening when they travel to Wales to battle Cardiff City in the postponed match of the 23rd Championship round.

The Rams are in a very tough position despite a marvelous streak that has moved them from the very foot of the standings to third form bottom.

Wayne Rooney’ squad are now eight points shy of the safe zone and still have a long way to go before getting in full contention with the likes of Reading.

Nevertheless, we are still full of praise for the amazing job Rooney had done so far to bring Derby County at least this close to the safe zone after a 21-point deduction.

This is a very much winnable affair for Derby, but their record on travels does not promise much on Tuesday.

Derby have played a lot better at their Pride Park Stadium so far in the season. Away from home they only managed 2 wins in 16 outings so far, netting just 11 goals in the process.

On the other side we have Cardiff City who have enjoyed a decent spell of form in their own back yard lately.

The Welsh outfit have gone on a strong run of three wins and a draw in four straight home outings recently. They have allowed just two goals during this stretch.

Derby County lost four in a row on the road. They have generally been struggling to find goals up front throughout the season, and especially on travels. Since Cardiff City have been pretty tough to break down at home lately, we are leaning towards the low-scoring affair here.

We will thus go for the Under 2.5 goals FT as the main betting option at the 1.72 odds, while you can alternatively take the 2.20 odds offered for the home win bet here.