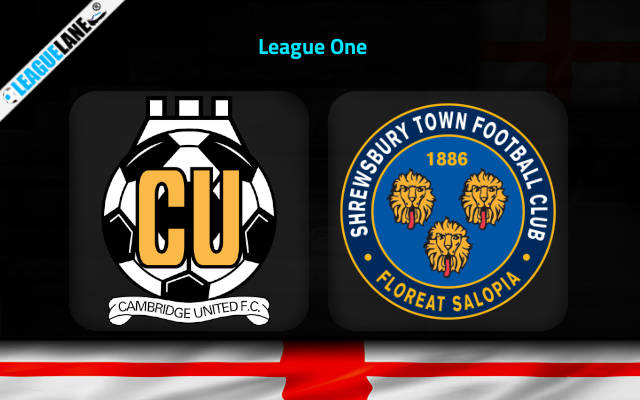 Cambridge vs Shrewsbury Predictions and Free Tips from our expert tipsters when the teams go head-to-head in League One on Monday, 26 December 2022.

Shrewsbury supporters are excited as their team are making good progress this month. They celebrated an important 3-2 victory against Bolton recently.

Meanwhile, Cambridge surprised everyone as they held league leaders Plymouth in a goalless draw. However, they have a long road ahead of them if they wish to remain in this league. They have lost more than half of their league games till now. This is one of the reasons why they are in the 20th position.

Both teams last played against each other back in March in a goalless draw. The visitors are unbeaten since 2020.

Shrewsbury celebrated a huge 4-1 victory against this team back in 2021. Moreover, looking at the current season, the host are yet to win a home game this month.

Who will win the match between Cambridge and Shrewsbury?

Considering Cambridge’s abysmal form since October. We can back Shrewsbury to win this fixture. The visitors are on a two-game winning streak in the league. Also, they are unbeaten in the last three head-to-head fixtures.

We can expect Under 2.5 goals to be scored, the main reason is that in four of the last five overall head-to-head matches not more than two goals have been scored.

The chances are low that both teams will score in this fixture. This is after considering that both teams have scored in only one occasion out of the last four matches in the last six years.

The first tip is that Shrewsbury will win both halves of this game – at 4.33 odd. They won both halves of the game in their last two victories against Cambridge. The same trend was also there when they defeated Bolton recently.

Our second tip is that Under 2.5 goals will be scored – at 1.65. Both teams are not in good goal-scoring form. With just one exception the last four head-to-head matches ended with less than a combined total of two goals being scored.