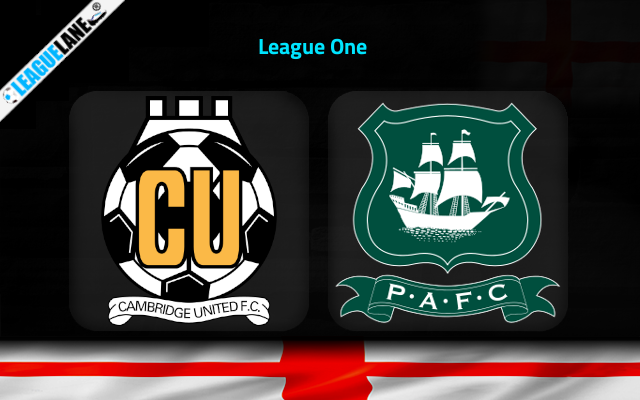 Cambridge United vs Plymouth Predictions and Free Tips from our expert tipsters when the teams go head-to-head in the England League One on Saturday, 10 December 2022.

Cambridge United are currently at the edge of the relegation zone in the table. They are now in a stage where they need to play without dropping points if they want to secure their spot in the table.

But things will not be easy for Cambridge this Saturday. They face the current toppers Plymouth. It is worth noting that neither Plymouth nor Cambridge United have won in the last three league outings.

These two teams have met head to head in League One and League Two campaigns in the last few years. Cambridge are unbeaten in both games they met in the last League One season.

Cambridge United can also rely on the recent tradition at this stadium since they won the previous two encounters against Plymouth.

Who will win the match between Cambridge United vs Plymouth?

We expect a victory for Plymouth despite of the head to head upper hand of Cambridge United.

Plymouth is on an eight-fixture unbeaten streak on the road. Meanwhile, Cambridge United are on a six-fixture winless streak at home.

Over 2.5 goals are unlikely to land in this match. Although fixtures including Plymouth have seen goals over 2.5 lately, Cambridge United have not recorded a single one of those in the past six home outings.

Cambridge United owns a poor offensive side which have failed to score at least one in the past six consecutive home fixtures.

We don’t expect them to take advantage of the Plymouth defense which have allowed goals from the opposite side in the past four road trips. Therefore, we don’t expect goals from both teams on Saturday.

We like to back Plymouth considering their current on the road form. For the main bet, we like to place Plymouth to Win at 2.20 odds.

For the second tip, we like to place the under 2.5 goals bet at 2.00 odds since Cambridge United have been delivering a poor display in their offense.