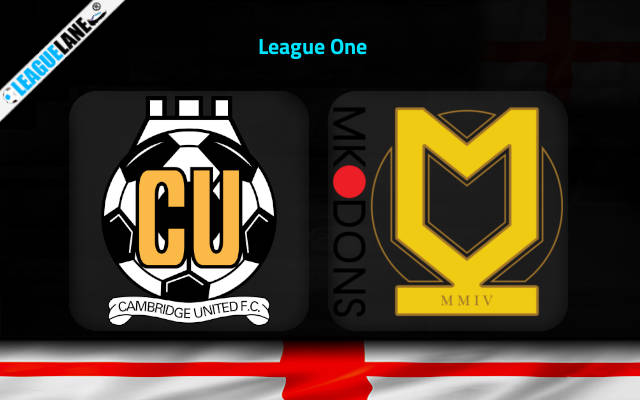 A period of 11 straight games without a defeat marks the triumphing campaign of Milton Keynes Dons so far. They lack only 3 points to get into the zone for Championship while having succeeded in scoring at least twice in their last 3 away games across all competitions. Cambridge United are on an unbeaten run of 6 home games in League One but remain pathetic on road. Residing in the second half of the table, they hope to climb up as they host the Dons at Abbey Stadium this Saturday for the 39th Round of League One.

The Dons are at the 3rd spot on the standing with 73 points from 38 games. They won 21 times in the league while drawing on 10 and losing on 7 other occasions. They scored only 63 goals in total while conceding a sum of 38 thus far.

In their previous fixture, MK Dons drew 1-1 in the league match with Wigan Athletic. Their only previous away league game against Cambridge was a 1-0 win in October 2018 under Paul Tisdale.

On the contrary, the U’s reside at the 15th position on the table with 45 points. Of the 37 matches played, they won 11 times in the league while drawing on 12 and losing on 14 other occasions.

Cambridge United has been hammered by Sheffield Wednesday by 6-0 in their last game. They have achieved just 2 wins of their last 12 games across all competitions while having conceded 1.57 goals in their last matches in League One.

MK Dons’ Scott Twine scored twice and provided two assists in the reverse fixture and has been the first player to do so for the club in league competition since Rhys Healey.

The hosts are unbeaten in 7 of their 8 most recent home matches while Milton Keynes Dons are having a period of 13 straight away League One clashes in all of which they have scored 1 or more goals. Therefore we feel that an away win is likely while also considering their past h2h dominance.