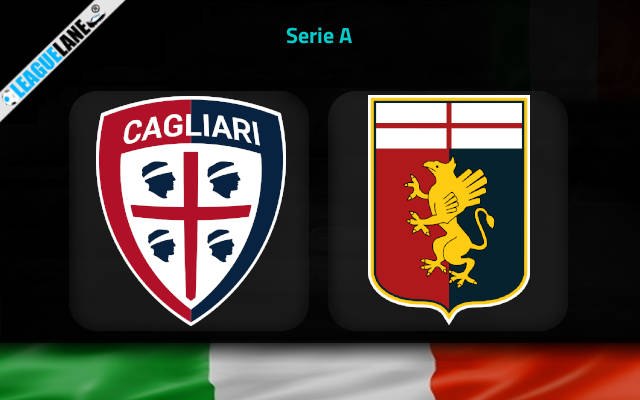 Cagliari have been in a comparatively better run lately, and they also have a good h2h record at this venue over the years. Meanwhile, Genoa have made a total mess of their campaign so far, and are placed second to last in the table. Likely, expect the former to have the upper hand.

They had finished 16th in the table the former season, and delivered some good performances when it mattered, which helped them to avoid relegation.

They had a lead of just four points over the cut-off, and realistically they were under the threat of getting the boot at least until the second to last match-day.

They started their 2021-22 campaign with a high-scoring draw, and then later fell against runners-up of the previous season, AC MIlan.

In the meantime, Genoa have a 100% losing record in the new edition of the Serie A, and they have scored a total of just one goal so far. Their defense has been at a total loss meanwhile, as only two other teams have been conceded more goals than them.

By the looks of things, expect Cagliari to be the better team on the pitch this Sunday.

Cagliari lost 4-1 on the road the last match-day, against AC Milan. In the meantime, Genoa lost 1-2 at home against Napoli.

Going on, Cagliari were unbeaten in nine of their preceding eleven overall games, and of the two total losses during this stretch, one had come against none other than Milan.

They also have a superb h2h record against this rival at this venue over the years, and have scored heavily in the process.

On the other hand, their counterparts are on a three-match losing run, and they were winless in 17 of their last 23 games. Moreover, they had also lost six of their past nine road trips.

Considering these stats, expect a win for Cagliari.

However, Genoa have performed well in h2h encounters which were not at this stadium, and they also had finished higher in the table in 2020-21. Moreover, they had a tough schedule to start their season with, and this is the first relatively easier match-up this season.

Likely, count on them to find the back of the net at least once.