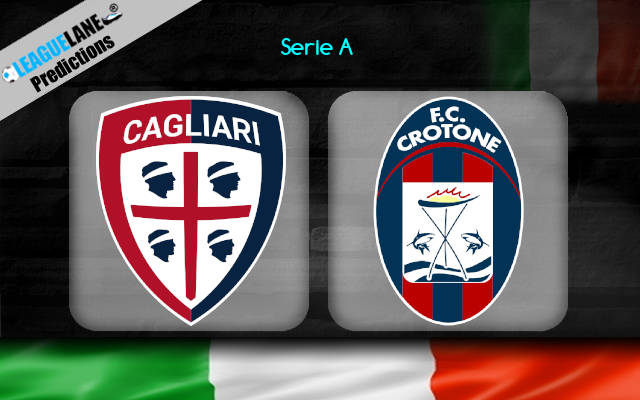 Crotone shocked Juventus and held them to a 1-1 draw last week, earning their first point this term and now hoping to build on the performance as they travel to Cagliari. They have been scoring goals quite regularly but struggled to capitalize with obvious woes at the back, which could be very worrying for Giovanni Stroppa once again.

Cagliari come into the match with a fine goal scoring streak behind them, finally earning a win this term as they outgunned Torino (2-3) in a five-goal thriller. They saw Lazio (0-2) and Atalanta (5-2) snatch the points beforehand but certainly have more to hope for against struggling visitors now. We do expect a contest but Cagliari have ambitions to build on their mid-table spot and we see them doing so.

Rossoblu now have four points to their name after four games played and while the fans could be worried after such a start, they sit 6th placed Inter Milan just three points clear. They haven’t impressed defensively against the big guns and with that in mind, we hope to see them enjoy an exciting contest on Sunday too – as we go for goals and the home side to turn it their way in the end.

Cagliari bagged a 1-0 win in their last matchup at this ground, when Marco Sau made all the difference.

Crotone last beat Cagliari in Serie A back in January 2016, with three losses and two draws seen in five encounters since then.

We will now back Cagliari to secure the points and we hope to see them do it in an exciting game as we go for a Home win at 2.00. They certainly come into the match in a better mood and we feel they can capitalize on it, despite obvious struggles to keep it together at the back – which saw them concede ten goals already.

Crotone have a high to build on as well after holding off Juve (1-1) and we have seen them scoring goals on the regular. With that in mind, we hope to see a solid challenge and the visitors doing their bit in making this an exciting game at Sardegna Arena. We’ll thus also go for a YES on Both teams to score at 1.70!