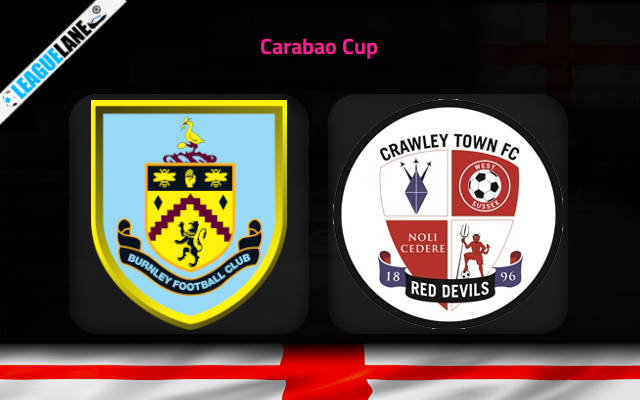 Burnley will be taking on visiting side Crawley at Turf Moor in the Carabao Cup fixture on Tuesday.

Burnley seems to have picked up things in Championship lately. They have a 100% unbeaten record so far this season, barring a single fixture, and they are also consistently finding the back of the net.

As of now, they are placed first in the table, and to secure it would be their immediate objective. In their prior 8 fixtures, Burnley hit the target a total of 17 times.

They will try to destroy a League Two team when they are in such a form, winning Championship games effortlessly.

Currently 19th in the League Two table, Crawley are unable to win even against the top ten teams in their league. They will be very low in spirits when they go up against Burnley in such a situation.

To make things worse, they have one of the worst defensive sides in League Two. Only one team has conceded more goals than them in the whole League Two competition.

Burnley, who have been scoring goals consistently in the past many games, will definitely net in a goal-fest if they gets a weak defensive outfit like Crawley.

By the looks of things, expect a high-scoring victory for the home side Burnley on Tuesday at Turf Moor.

The Clarets have won their last four games against Championship sides at this stadium. They won two of these games without conceding goals.

In general, their defensive line have offered decent performance throughout this season. So they can expect a clean sheet win over a team like Crawley.

Moreover, Crawley head into this fixture without a win on the road since the beginning of this League Two season. All these reasons are more than enough to make it certain that they will concede a defeat.