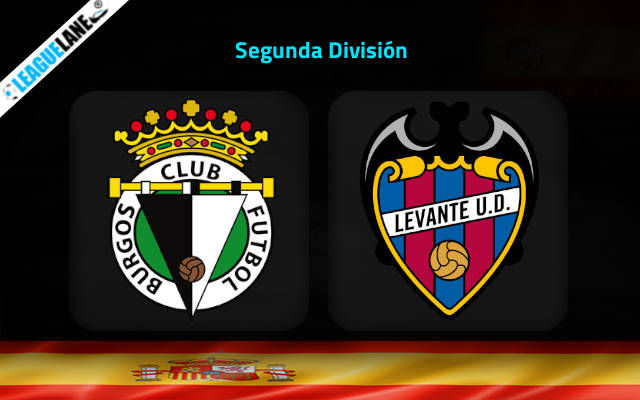 Burgos host Levante in the first match of Sunday’s Segunda Division program in Matchday No 7 of the competition at Estadio Municipal de El Plantio.

Believe it or not, the hosts have a goal difference of 2-0 after six games of the season so far. They have not conceded a single goal in the inaugural six outings and yet they are holding only the sixth position in the league standings.

Obviously, head coach Julian Calero can be thrilled with his team’s defensive showings so far in the season.

Their latest goalless draw came seven days ago in the away clash against Leganes. We generally don’t see too many goal-scoring chances at all in Burgos’ games in this term of Segunda Division.

We certainly have reasons to expect something similar to a goalless affair this time around against Levante who have also been very tough to break down so far in the season.

Levante shipped only three goals in the first six outings of the campaign. One of these three goals came last weekend in the 0-1 home loss to FC Cartagena.

It was the maiden defeat of the campaign for Mehdi Nafti’s troops who had previously demolished in-form Villarreal B 4-1 on the home patch.

Levante sit tenth in the league ladder at the moment being just a single point below sixth-placed Burgos going into this tie at Estadio Municipal de El Plantio.

Everything points towards a low-scoring scenario and here and one does not need to be extra smart to figure the Under 2.5 goals FT is by far the best betting option for this game at the 1.53 odds.

We will go one step further and back Burgos to keep yet another clean sheet at the sky-high 3.25 odds knowing they are yet to concede a goal in this term of Segunda Division.