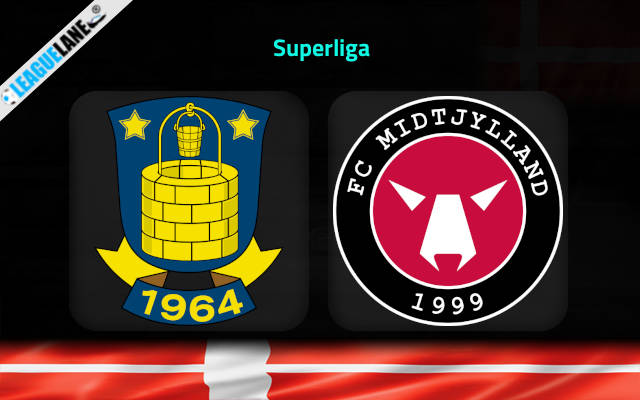 Midtjylland and Brondby had finished 2nd and 3rd respectively in the Danish top flight at the end of the previous regular season – separated by just 2 points. But then the former went on a rampage in the Championship Round – and missed out on the title by only a tiny margin of points.

In fact, in their total 10 fixtures in the postseason they had recorded 7 wins and 2 draws. Likely they amassed 23 points and none of the other teams were able to deliver these kinds of performances in the Championship Round.

It is true that they missed out on the title at the end but they were trailing by just 3 points below the first-placed team.

Meanwhile Brondby were able to add an additional 6 points in the post-season and this itself is huge evidence so as to judge the level of these 2 squads.

Going on Midtjylland also have a good head-to-head record against this opponent over the years and especially so at this venue.

By the looks of things, expect a victory for them this Monday.

Brondby were winless in 6 of their past 9 overall fixtures and they had also lost 3 of their last 4 games. Do also take into account the fact that they had let in 2 or more goals in 6 of their previous 8 matches.

On the other hand, Midtjylland were unbeaten in 19 of their previous 24 overall matches and in the process, they had gone on separate 4-game as well as 5-fixture winning streaks.

Moreover, they have lost a total of just thrice away from home in the past 6 months and in the process they had even gone on a 6-game winning stretch.

Considering these observations, expect a victory for Midtjylland this Monday.

Tips for Brondby vs Midtjylland