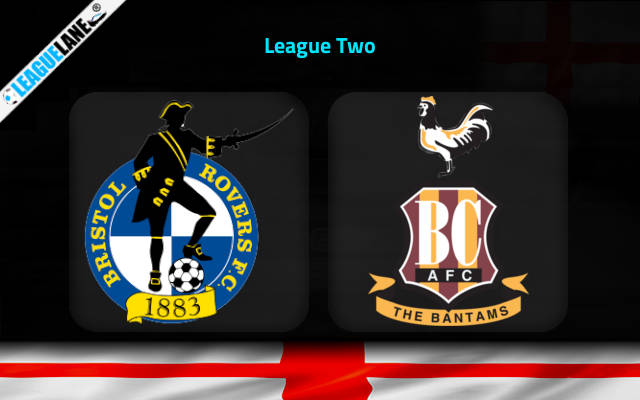 With 16 points and 7 positions in the difference, Bristol Rovers will be hosting Bradford City who haven’t won back to back league games. They will be facing each other at Memorial Stadium this Saturday.

The Pirates are at the 6th spot on the standing with 63 points from 39 games. They won 18 times in the league while drawing on 9 and losing a dozen other occasions. The side lost previously, ending their 4 game winning streak in the league.

Bristol Rovers will be hoping for a better result following the 0-1 league loss in their previous game against Carlisle United. Taking their previous 6 matches leading up to this one, in as many as 5 of them, a wager on BTTS would’ve been a loss.

On the contrary, Bantams reside at the 14th position on the table with a 47 points. Of the 39 matches played, they won on 11 games while drawing and losing 14 games each. They are looking to win 3 consecutive away league games for the first time since a run of four in December 2017.

Previously, Bradford City had a goal-less draw in the League Two with Newport County. Mark Hughes’s squad have scored 6 times throughout their previous 6 matches. The aggregate of goals that have been conceded during the same period adds up to 6.

Meanwhile, Bristol Rovers are unbeaten in all of their last 9 home matches in League Two. In their last 3 home games, the Pirates have managed to maintain a clean sheet.

By the looks of things, we feel that a home win is likely to occur as they won 57% of the games played at home, this season. They are also on the back of 3 straight home wins.