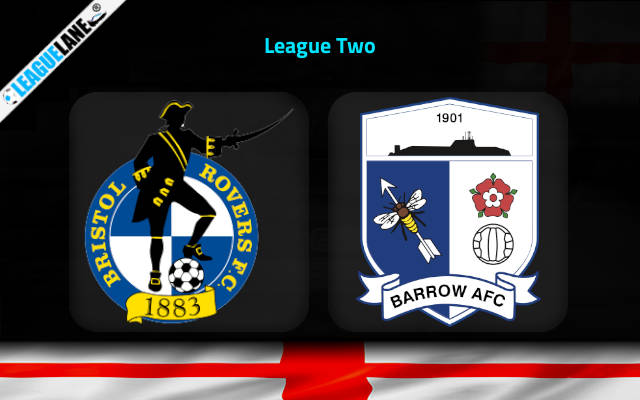 Bristol Rovers won the last 3 league fixtures in a row while losing only once from the last 5 fixtures. They lack only 3 points to get into the Play Offs zone and are currently on a good run of form this season. Barrow drew the latest league game and are without a win for the past 3 fixtures. With 16 points separating the two, The Pirates will be hosting the Bluebirds at Memorial Stadium this Tuesday for the 26th round of the League Two tournament.

Bristol Rovers are at the 9th spot on the standing with 47 points from 31 games. They won 13 times in the league while drawing on 8 and losing on 10 other occasions. They scored 44 in total while conceding a sum of 39 so far in the league.

The hosts won the last fixture against Leyton Orient by 2-0 which is their third consecutive league win. Over the prior 5 league fixtures, they have conceded only 2 while bagging a sum of 9 for themselves maintaining 4 cleansheets.

On the other side, the Bluebirds resides at the 20th position on the table with 31 points. Of the 31 matches played, they won 7 games while drawing on 10 and losing on 14 other occasions. Their total goals to conceding ratio stands at 30:39 showing that they need to improve their defense.

Barrow drew the last league fixture to Stevenage with no goals to spare. They scored only 4 times from the past 5 league schedules while their own defenders saw 6 goals go past them.

Previous matches between the two has averaged 2.5 goals while BTTS has happened on all of the time. We anticipate a home win as the Pirates are undefeated in the last 5 games at home, winning 4 of them. Meanwhile, the visitors are struggling on road this season.