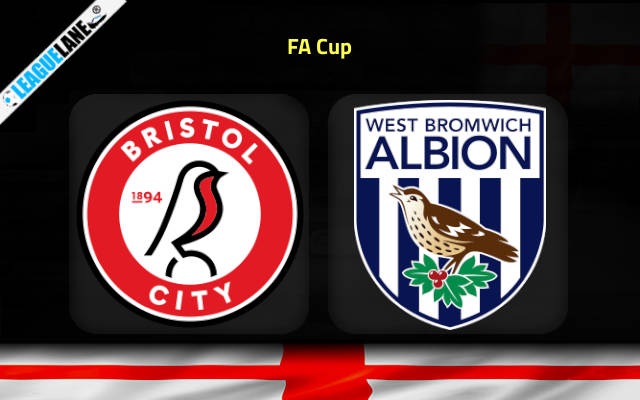 Bristol City vs West Brom Predictions and Free Tips from our expert tipsters when the teams go head-to-head in the England FA Cup on Saturday, 28 January 2023.

Bristol City have been delivering inconsistent displays since the beginning of this season. Anyways, they have managed to record a set of unbeaten outcomes lately, showing a decent pick-up in form.

However, they will have a tough test on Saturday in their FA Cup fixture against league mate West Brom, who is sitting eight points and seven positions above Bristol in the Championship standings.

West Brom won three of the last five head to head encounters against Bristol City. The latest match ended in a 0-2 win for west Brom.

Going on, West Brom is on a three-game unbeaten streak against Bristol City at this stadium. Three of the past four h2h meetings at this venue saw the landing of over 2.5 goals option.

Who will win the match between Bristol City vs West Brom?

Bristol City have a disappointing form at home. They were winless in 9 of the past 10 home matches. On the other side, West Brom was unbeaten in six of the last 10 road trips.

Moreover, West Brom have a slight edge in the recent history of this match-up. Thus, we expect a win for West Brom on Saturday.

West Brom’s attacking side have netted in a total of 9 goals from the last four away matches. Meanwhile, Bristol scored a total of 6 goals in their last three home matches. The above goal trend suggests an over 2.5 goals scenario and we are expecting goals at that rate here.

The defensive line of both the teams have allowed goals in their past several matches at respective patches. Thus, we expect goals from both ends of Ashton Gate Stadium on Saturday.

Their Championship meeting on December ended in a 0-2 win for West Brom. Even before that clash, West Brom was in a better shape than Bristol City and it’s been the same till now.

We therefore like to back West Brom to win at 2.25 odds as the main betting option while placing the both teams to score option at 1.91 odds as the second.