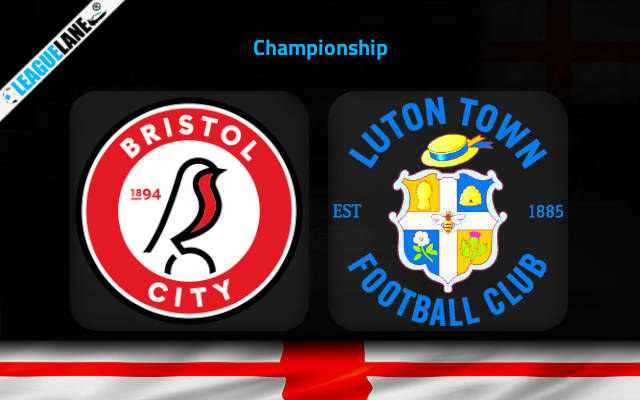 Bristol City and Luton Town have an identical record going into their head to head clash in the seventh round of the Championship.

Substitute Luke Berry rescued a point for Luton Town by scoring a late brace (including a 97th-minute equalizer) on Saturday afternoon at Ewood Park.

Nevertheless, it was yet another match that gave headaches to Welsh manager Nathan Jones whose men once again revealed way too many defensive holes.

Luton are now winless in three successive outings, a run that has seen them concede seven goals in the process.

It is hard to expect the Hatters to rebound here against Bristol City who look to have found the right shape after clinching four points in the last two rounds.

The Robins saw off Cardiff City 1-2 on the road before playing out a goalless draw at home to Preston North End this weekend.

The head coach Niger Pearson can be much more satisfied (compared to his colleague at the opposite end) with his team’s recent defensive showings.

Bristol’s back line can make all the difference here. On a negative note, the Robins are yet to celebrate a victory on the home patch this term.

Luton’s visit is the perfect opportunity for them to grab the inaugural one.

Bristol City are on a good run and we can recognize the value in backing them to win at the 2.45 odds. Their forward Andreas Weimann bagged two goals in each of the last two away matches against Reading and Cardiff City.

Is it time for him to finally shine at home? The Austrian striker is sky-high 3.50 to score anytime past the leaky defense of Luton’s.