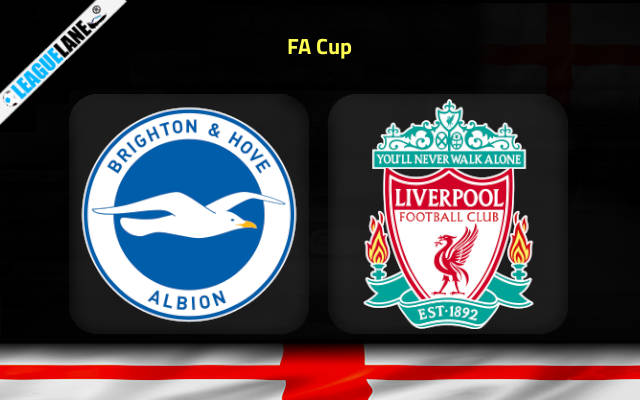 Liverpool will get a chance for their revenge on Brighton & Hove Albion on Sunday afternoon when they visit The American Express Community Stadium for the fourth round clash in the FA Cup.

The Reds suffered a demolishing 3-0 defeat earlier this month when they visited this same venue in the Premier League clash.

It was a match completely dominated by Brighton from the first to the final whistle. It will thus be very interesting to see whether this cup encounter will bring us a different scenario this weekend.

Based on the recent performances, it is actually hard to expect a different outcome than the one that occurred on January 14th when these two teams met.

Brighton are without a doubt one of the most pleasant surprises of the season in the Premier League. They hold the sky-high 6th position in the league table after 21 round and they have two games in hand on fifth-placed Tottenham who are five points adrift.

Liverpool, on the other side, hold the disappointing 9th place in the league ladder, sitting two points behind the Seagulls at the moment.

Jurgen Klopp has huge problems with the injured players all over the pitch. He can’t count on the services of Virgil van Dijk, Luis Diaz, and Diogo Jota among others, while Darwin Nunez also missed the last couple of games through injury.

The Reds’ back line has been extremely vulnerable this season and we are not optimistic regarding Liverpool’s chances of keeping things quiet defensively against the free-scoring Brighton.

Brighton are scoring for fun and Liverpool are nowhere near their best form, either attackingly or defensively. We have no other option but to take the 3.60 odds offered for Brighton to win & Over 2.5 goals FT bet.

The player we are particularly interested in tracking for this game is Kaoru Mitoma. The Japanese winger has been sensational of late for the Seagulls. He scored a spectacular goal in the 2-2 stalemate to Leicester last weekend at King Power Stadium. You can back Mitoma to score here past Liverpool at the odds of 3.25.