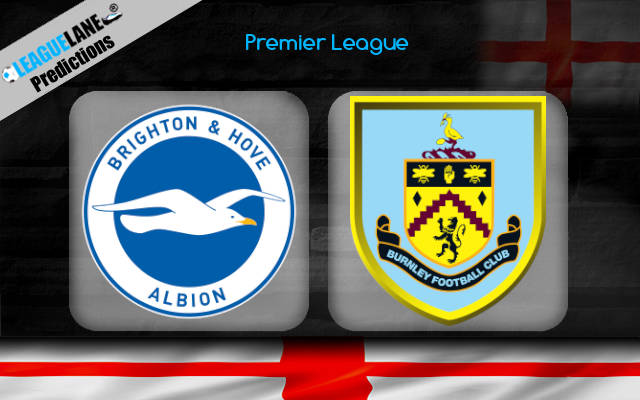 Friday’s English Premier League round of fixtures kick-off with a must win game for Brighton and Burnley at the Amex Stadium.

Both teams are relegation bound, but Brighton is slightly better as they played some good football at times. Yet, they managed just 5 points from 7 games and positioned at 16th in the table.

Meantime, last week’s 1-2 narrow loss at Tottenham put them on a 6 match win-less run across all competitions, 5 of them in the Premier League.

The Clarets are among the three teams in the league yet to win a single game this season. They played 6 games, 1 less than most of the teams, suffered defeats in 5.

The defeat by 0-3 margin at home to Chelsea last week kept them at the rock bottom in the table. Also they are the joint lowest scoring team in the Premier League with 3 goals.

Burnley are slightly ahead in the h2h Premier League clashes with 2 wins, while drew 3 and lost 1.

The corresponding fixture of last season was a 1-1 draw.

Both teams scored in the last three meetings, but not in the previous three.

Despite winning just 1 of the 7 matches so far, Brighton were good in most of those games and were unlucky to have lost in a few of them. The loss against Spurs and Manchester United as well as the draw against Crystal Palace standout from that list.

Meantime, Sean Dyche’s men have plenty of problems all around the pitch. Their forwards are misfiring while the defense that played a big part in their wins last season is no more rock solid.

Under these circumstances, the home win priced at 1.85 is the best option.

And I will take the under 2.5 goals as the second option since the teams scored only a combined 14 goals from their 13 matches.