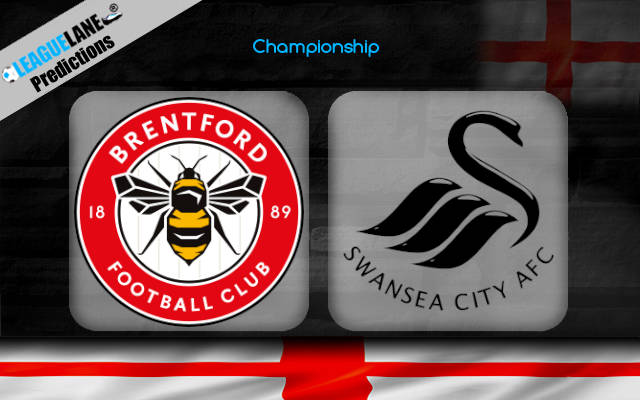 Brentford welcome Swansea for Tuesday’s Championship fixture and punters could expect goals with both teams coming on the back of fine form.

The Bees thrashed Luton 3 -0 to bag their third win in 5 games while Swansea stretched their unbeaten streak to 4 games with the 2-0 win over Blackburn, also their second win on the trot.

However on overall form, the Swans are the better side and stay at second on the table at a 4 point gap from Reading. Brentford are 9th, but just a point outside the play-off zone.

The bookies are taking the hosts are favourites on 2.00 odds while a draw can be backed at 3.40 and the away win for the Welsh side at 3.80 odd.

There have been 7 meetings between the sides since 2018 and each game has produced a winner. The Swans lead the race with 4 wins.

Six of those meetings saw over 2.5 goals and both teams scored in four of them.

However, Brentford won the last two at this ground by the same 3-1 ft scoreline, most recent of the duel coming in last season’s play-off semi final. But they lost the previous 3 at this stadium.

This could be a tight match as both teams are in excellent form and what makes it more difficult to predict is the fact that each of their last 11 meetings saw a winner.

This is why we focus on goals and we have some strong stats to convince us that this offers excellent value. Brentford have scored in every game since they lost 1-0 at Birmingham, and the same numbers apply to Swansea, failing to score just once, which happened on matchday 2.

So, we take both teams to score as the primary pick for this EFL Championship game, while over 2.5 goals full-time give us a decent alternate.