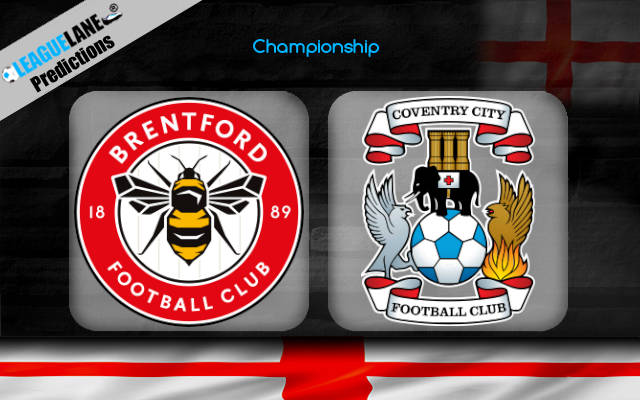 Brentford FC were one of the main candidates to fight for direct promotion in the Championship, but their slow start is not looking promising at the moment.

The Bees are stuck in 15th place with only four points on their account, but with a solid chance to make progress this Saturday.

They will welcome Coventry City at Community Stadium, being labelled as big favorites for the win at 1.60 odds.

The Sky Blues are known by strong performances at home venue, while away days have always been rough. All in all, we should see an exciting encounter.

There were only four head to head encounters between Brentford FC and Coventry City in the past, mainly because they rarely were playing in the same division.

The score is heavily going in favour of the Bees, 3-0 in terms of victories while only one duel ended without a winner.

Brentford scored eight goals in those meetings, Coventry City bagged three, so the average per one game is 2.75.

The last time they locked horns was in season 2013/2014 in League One. Bees won both with total goal difference of 5-1.

Departure of Ollie Watkins to Aston Villa had much more impact on Brentford’s results. This player has shown so much in the previous season and in Premier League so far, especially against Liverpool.

The Bees are not struggling when it comes to scoring, but their back line. They have kept only one clean sheet so far in four attempts, conceding six goals. That is a lot if you are aiming for top two positions.

The most shocking defeated happened before the international break at this ground.

Brentford had comfortable 2-0 lead against Preston, but still lost the match 2-4. Key player to pay attention to is Ivan Toney who bagged three goals so far.

Coventry City have the same number as their opponents at the moment, but in our opinion, their quality is nowhere close to Brentford’s.

We expect Coventry to go down easily at Community Stadium.