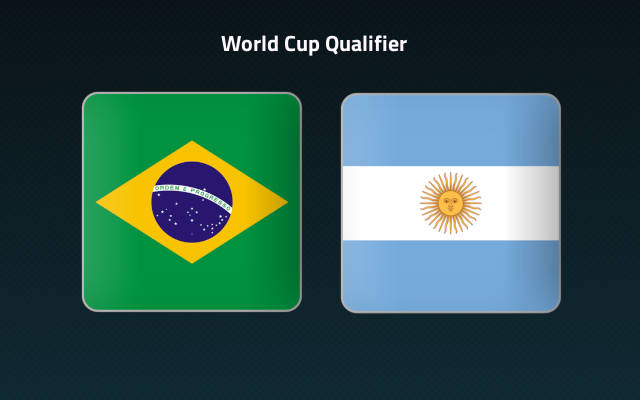 It cannot get better for football fans around the world when Brazil welcomes Argentina for the World Cup qualifiers on Sunday seeking revenge for the Copa America defeat a few months ago.

It was a solitary goal from Angel Di Maria that helped Argentina clinch the Copa America title at the expense of Brazil in Brazilian soil.

But the scenario is totally different when it comes to qualifying fixtures and Brazil, even when far away from their best, managed to hold off every opponent in their own backyard. This incredible unbeaten home record started since they lost to Chile back in 2015. The current streak includes 8 straight wins with clean sheets and the last team to score here is Colombia in 2016.

Brazil come to this match sitting at top of the table by bagging wins in all 7 matches played so far with an incredible goal aggregate of +15. Their latest is a narrow 1-0 win, but that was a tough away fixture at Chile.

Argentina are not far behind and they are second in the standings, but the point gap is a 6 points. They have been fairly inconsistent in the competition managing 2 wins from the last 5 after starting with back-to-back wins.

Scaloni’s men could take a lot of positives from their latest Copa America triumph and rightly so the confidence was evident in the 3-1 away win at Venezuela on Friday.

There is little to choose between the teams in head-to-head comparison since Brazil won 4 of the last 8 duels while Argentina were triumphant in 3 with 1 game drawn.

However, the record is strong for the Brazilians when it comes to qualifying fixtures at home as they are unbeaten in the last 4 against Argentina with 3 wins and 1 draw. Interestingly, they netted 3 goals each in those wins.

This is without a doubt a tough game to call with two equally strong squads with world class players playing for pride.

But if I have to choose one winner, it has to be Brazil. It is mainly due to their home record in the competition and this indeed is a big pressure for visiting teams. Messi’s lack of game time and match fitness in the current season is another factor that influence my tip.

At the same time, goals will be at a Premium, both teams have largely improved in this department in recent months. On top of that, this is expected to be a tactical battle.