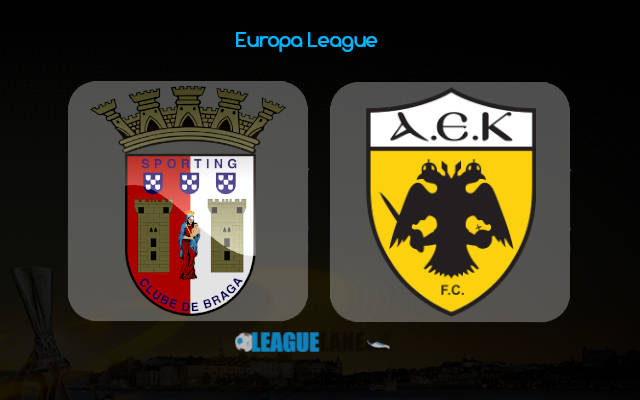 The new Europa League season is starting this Thursday and we are about to see dozens of great matches. One of them is taking place in Portugal where Sporting Braga welcomes AEK Athens.

Hosts have had very bad start to their Primeira Liga journey, having lost two initial games. They have recovered recently though with two back to back victories. It seems like international break had a perfect timing for this club. Considering their vast experience of playing on European scene, 1.72 odds on home victory doesn’t come as a surprise.

Greek side have been inconsistent when it comes to playing in group stages recently.

There were no previous head to head meetings between Sporting Braga and AEK Athens.

Sporting Braga were playing in this stage of Europa League last season as well, making it to the playoffs in big fashion by scoring 10 goals in last three games. However they were easily eliminated in Round of 32 by Glasgow Rangers by losing both encounters with a total goal difference of 2-4. This team should have a good chance to earn one of top two spots again in a group with AEK, Zorya and Leicester City.

After the losses to Porto and Santa Clara, Carlos Carvalhal’s squad recovered with two great appearances. First they demolished Tondela 4-0 FT (Galeno was man of the match with two goals), followed by last weekend’s 2-1 win against Nacional. They are slowly catching up in terms of standings too, currently sitting in 6th place.

As for their opposition, AEK Athens are having a trouble of their own lately. They unexpectedly lost a match on the road to Atromitos, which surely ruined confidence gained after eliminating St Gallen and Wolfsburg in Europa League qualifiers. This team has been very consistent when it comes to scoring though, bagging at least one goal in five out of last six outings. This is one of reasons why are we backing the BTTS pick on Thursday, as well as home win.