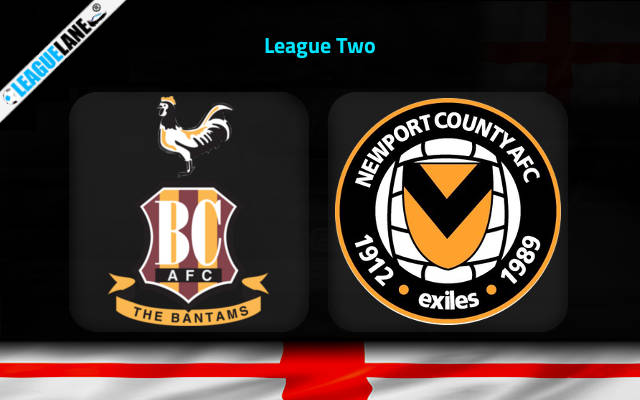 Newport County lost the previous fixture which ended their 3-game winning streak in the league. They are unbeaten in 7 of their last 8 League Two games and are in the zone for Play Offs. Bradford City lost their last game after two back to back victories. They still remain awful at home games but are a mid table side. The Exiles hopes to take advantage of the hosts’ dreadful home run as they are set to visit them at Valley Parade this Saturday.

Newport County is at the 6th spot on the standing with 62 points from 38 games. They won 17 times in the league while drawing on 11 and losing on 10 other occasions. They have the second highest scoring figures on the league with 62 in total.

Newport County lost their last fixture against Hartlepool United by 2-3 ending their 7-game unbeaten run in the league. In their last six outings, they have amassed a total of 12 goals while not failing to score on every single one of those games. In that time, they’ve seen 7 goals go into their own net.

On the other hand, Bantams reside at the 15th position on the table with 46 points. Of the 38 matches played, they won on 11 while drawing 13 times and losing on 14 other occasions.

Bradford City will be wanting a better result here following the 1-2 League Two loss in their previous game against Port Vale. Mark Hughes’s men have scored a total of 7 times in their past half-dozen outings. The corresponding number of goals that they have conceded in that same time amounts to 9.

The hosts have not registered a win against Newport in their previous 4 matches in the league and haven’t won at home since the past 7 games in the league. Therefore, we feel that an away win is likely to happen this Saturday.