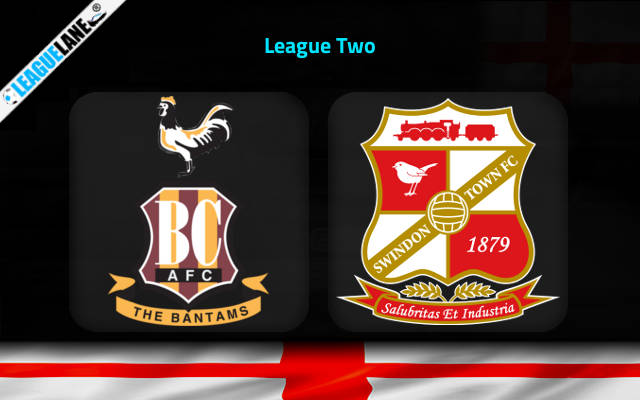 Game week 25 of League Two brings us the match between Bradford City and Swindon Town on Saturday in Bradford.

Bradford City has added another loss to their tally after their last match against Mansfield Town. Mansfield scored two goals in the match while Bradford could score none, ending the match with 0-2 FT score.

Salford’s last-minute goal in the match helped the team to secure a win against Swindon. Swindon had taken the lead in the second half, but couldn’t maintain it for long. Salford’s goal at the end gave them the much-needed lead, ending the game with 1-2 FT score.

Bradford has not been in their best form lately. The team cannot keep a win-streak in the matches because of their inconsistency in form. Their poor form has put the team in the 15th position on the league table with 40 points from their matches so far. Currently, the team is on a 4-game cold streak.

Swindon’s loss in the last match has put an end to their three-game win streak. They have played fairly well in their matches, which has helped the team to have a place in the upper half of the league table. The team sits 8th on the league table with 52 points.

Even Bradford’s home matches show poor results. They are winless in the last five matches and have only found one win since November. Even though the results are mixed, Swindon has found wins in their away matches.

So, the match is most likely to end in a win for Swindon Town.