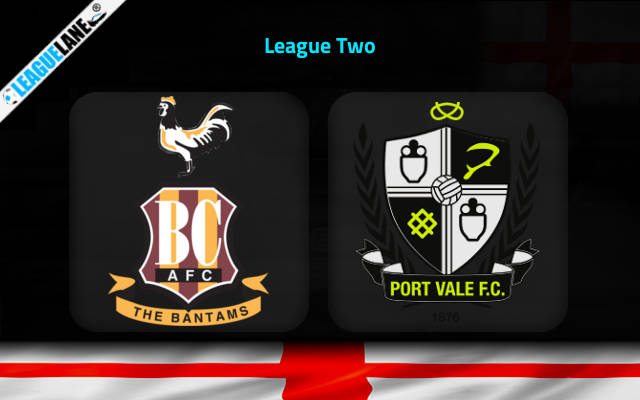 In game week 38 of League Two, Bradford City faces Port Vale for their next match on Saturday at Bradford.

Bradford City has got mixed results from their matches this season. This shows the team has been inconsistent with their performance. Bradford City played their last match against Hartlepool United. Bradford City took the lead in the match at the 70’minute and added to the lead few minutes later. Hartlepool, however, couldn’t score any goals in the match, resulting in a loss for Hartlepool with 0-2 FT score.

With the win in the last match, the team has currently won in the last two consecutive matches. They are 13th on the league table with 46 points to their name.

Port Vale has played well in their recent matches and has lost in only one of the last ten matches. However, most of the matches have ended with draws. In the last ten matches, the team has got four wins, five draws and one loss. They are currently 9th on the league table with 56 points.

Port Vale played their last match against Mansfield Town. Even though Mansfield had scored the first goal of the match, they couldn’t keep the lead for long. Port Vale scored three goals in the match, ending the match in a win for Mansfield with 3-1 FT score.

Bradford City and Port Vale have won in their last two consecutive matches. However, Bradford lost in six of the last ten matches, while Port Vale lost in only one.

So, I think the match will end in a win for Port Vale. Since both teams have won in their recent matches, they can be expected to score in this match.