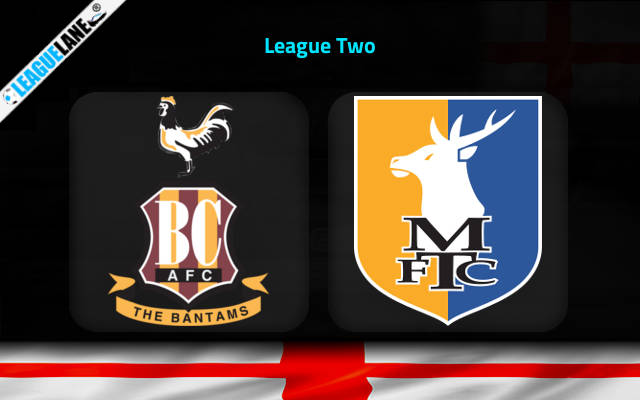 Mansfield sealed the last spot of Play offs as they remain unbeaten in the last 12 league games. They drew the last three away fixtures and are hoping to climb up the play off table as they don’t have a proper point gap between the others. Bradford City lost the last 3 games in succession and have marked 4 losses from the last 5 league appearances. Hoping to turn the tables, they invite the Stags to Valley Parade this Saturday at the 34th round of League Two.

The Stags are at the 7th spot on the standing with 50 points from 30 games. They won 14 times in the league while drawing and losing on 8 games each. They scored 40 in total while conceding a sum of 33 so far in the league.

Mansfield drew the last 2 fixtures to Bristol Rovers and Newport. Over the prior 6 league fixtures, they have conceded a total of 3 while bagging a sum of 8 for themselves.

On the other side, Bradford resides at the 14th position on the table with 40 points. Of the 33 matches played, they won 9 games while drawing on 13 and losing on 11 other occasions. Their total goals to conceding ratio stands at 37:41 which shows some room for improvement in defense is needed.

Bradford lost the last fixture to Harrogate by 1-3 making it their third loss in succession. Under three goals per game were recorded in 5 of the last 6 meetings where they have been involved. The opposing sides scored a total of 9 while they scored only 3 times from the same.

The visitors are left without a victory over Bradford when they’ve played them away from home in the last 2 league games. They also haven’t been defeated in their previous 5 league matches on road. The home performance of the hosts are also average, therefore concluding it to be a possible draw this weekend.