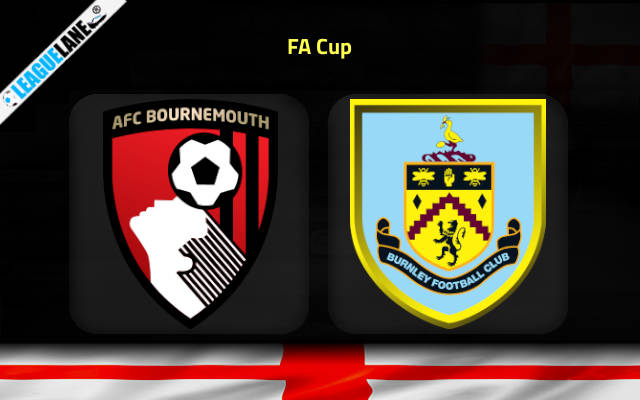 Bournemouth vs Burnley Predictions and Free Tips from our expert tipsters when the teams go head-to-head in the England FA Cup on Saturday, 7 January 2022.

Bournemouth are on a streak of losing games in Premier League and will be entering this FA Cup fixture following that slump. They will be facing an in-form Championship outfit Burnley on Saturday.

Going on, Burnley have only lost once in the past 8 matches across competitions. It deserves to be mentioned that their only defeat in the last 8 matches cam against Manchester United.

Burnley have won four of the last five encounters against Bournemouth. The latest meeting between these two was in an FA Cup match-day and it has ended in a 0-2 win for Bournemouth.

At this venue, the guests are having a three-game winning streak against Bournemouth. Three of the last four meetings at this venue saw the landing of both teams to score and over 2.5 goals ft option.

Who will win the match between Bournemouth vs Burnley?

Bournemouth lost three of the last five home outings. Their rivals were mostly from Premier League which deserves to be noted here.

On the other side, Burnley won three of the last four road trips. Their only defeat among those three came against a Premier League outfit.

However, they have been sealing wins over Bournemouth in the recent h2h clashes. In that case, we are quite not sure about picking up a clear winner here.

Their head to head tradition have often seen the recording of over 2.5 goals ft. Burnley’s attacking side alone have netted in a total of seven goals in the past four h2h matches at this stadium. In that case, expect an over 2.5 goals ft here.

Both teams to score option have landed in four of the last five h2h clashes between these two here.

The h2h superiority of Burnley reckons us to place the Draw no bet option in favor of them at 1.90 odds. Both teams to score at 1.70 odds seems to be a decent alternative considering the goal trend of both these sides.