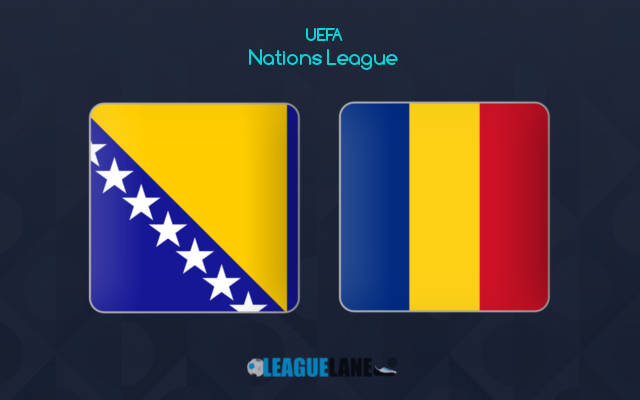 Bosnia & Herzegovina is set to host Romania in a match of League B in Group 3 at UEFA Nations League. They will be battling it out this Tuesday at Bilino Polje.

Bosnia & Herzegovina is on a quest to regain their League A status after getting relegated from the previous UEFA Nations League. The hosts played out a 1-1 draw against Finland in their previous game and will need to take it up a notch in this fixture.

Bosnia haven’t made the most of their chances of late. Their netting figure equals just 3 over the opposition teams over the course of their previous 6 fixtures. In those games, the hosts have also seen 8 goals go past them. They now sit 2nd in the group with 1 point in hand, same as that of Finland.

On the other side, Romania reside at the bottom of their group with zero points and will need to work hard in the competition. The away side slumped to a 2-0 defeat at the hands of Montenegro last week and will need to bounce back in this match.

Over the course of 5 of the prior 6 clashes involving Romania, a relatively low number of goals have been scored between them and their opponents. The overall average number of goals by Tricolorii is just 0.83.

Fewer than three goals have been scored in 7 of Bosnia & Herzegovina’s last 8 matches. The Dragons have won just two of their last 15 home internationals played since November 2020 and they come here with the aim of protecting a perfect home record in UNL League B home games.

Meanwhile, Romania’s last 11 internationals have also failed to produce a third strike. Improvements have been made over the past months where they had only three defeats coming in 10 matches in all competitions.

We feel that a home win is likely to occur this Tuesday as the visitors lost half of their last 10 on-road games.