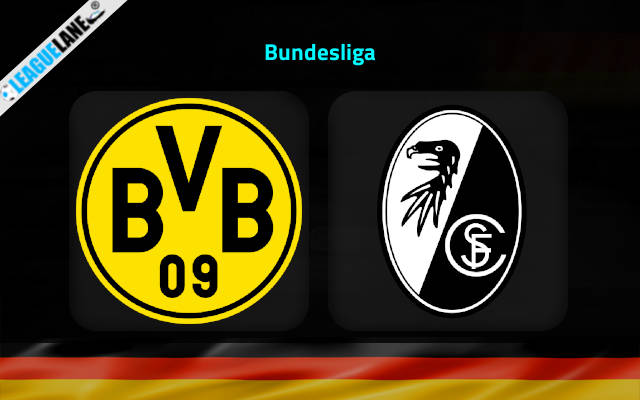 Borussia Dortmund vs Freiburg Predictions and Free Tips from our expert tipsters when the teams go head-to-head in German Bundesliga on Friday, 4 February 2023.

Der BVB are one of the only two teams in the German top flight to have won the last three games in a row, and are determined to take advantage of the loss of form of Bayern.

However, the fifth-placed Freiburg are determined to make the job harder for their counterparts. Moreover, this is also an opportunity for the team to gun for the podium.

Dortmund have a great h2h record against this opponent – and this includes a 1-3 win on the road just this season. In fact, they have a combined scorecard of 8-2 from the past two clashes.

It is also to be noted that the hosts won 13 of the previous 14 h2h encounters at this venue.

Who will win the match between Borussia Dortmund and Freiburg?

Such has been the dominance of Borussia, that they won 13 of the past 14 h2h meetings at this ground, and are totally unbeaten at home in the last 22 years.

On top of that they even recorded a 1-3 win in the reverse fixture this same season. And do consider the fact that Freiburg are on a two-fixture losing streak on the road, and have a combined scorecard of 1-9 in the process.

As such, Dortmund are expected to deliver a winning performance this weekend.

The latest h2h encounter ended as a four-goal thriller. In fact, 14 of the past 18 h2h meetings had three or more goals, while Der BVB scored 12 goals from their past three Bundesliga games at home.

At the same time, Freiburg conceded nine goals from their last two league fixtures on the road as well.

The last four h2h clashes had goals from both teams, and despite winning their latest Bundesliga fixture at home, Dortmund let in three goals. Moreover, only thrice have Freiburg failed to score on the road in all competitions in the past ten months.

As such, anticipate goals from either end of the pitch this weekend.

Importantly, they have a combined scorecard of 8-2 from the last two h2h clashes, and they also won 13 of the past 14 h2h encounters at this ground.

Going on, Freiburg are on a two-game losing streak on the road, and have a combined scorecard of 1-9 in the process.

Likely, Borussia Dortmund to Win at an odd of 1.75 would be a great pick this weekend.

Going on, they scored two or more goals in 100% of their fixtures after the World Cup, and they slotted in 12 goals from their previous three league games at home.