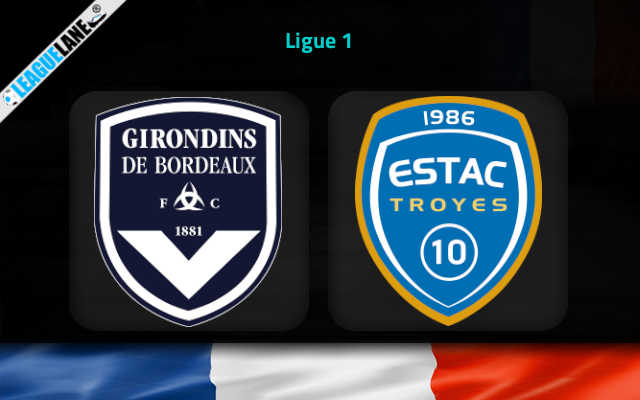 The worst attack in the league meets the competition’s worst defense on Sunday afternoon as Troyes travel to Stade Matmut-Atlantique to battle Bordeaux in Ligue 1 Gameweek 27 tie.

The teams are level on 22 points, sitting among the bottom-four sides in the Ligue 1 standings. We are thus in for a highly-important clash that could well determine both outfits’ destiny for the entire season.

Bordeaux managed back-to-back 1-1 draws to Monaco and Clermont in the last two rounds. These were the lone two games with new manager David Guion in charge.

Guion will thus be searching for his maiden win at the helm of Bordeaux here against Troyes who have been conceding goals with ease on travels lately.

Troyes lost six of the last seven away matches in Ligue 1. They have conceded nine goals in the last two away defeats to Brest and Rennes.

The team led by Bruno Irles claimed just two points from the previous five league rounds. On the bright side, the visitors did manage to hold the likes of Marseille to a 1-1 draw seven days ago.

Bordeaux, who scored at least a goal in four of the last five league games, will fancy their chances of finding the back of the net here past the vulnerable defense of Troyes’.

Bordeaux should have a lot of room to exploit the holes in Troyes’ back line on Sunday and we expect this to be the first win for the team under new manager David Guion.

You can back the hosts to win at the 2.25 odds, while Bordeaux are 2.20 to score at least two goals here.