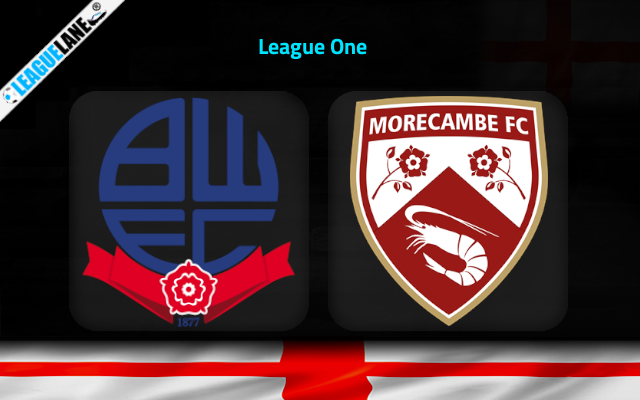 Bolton have managed to record a number of positive displays in the league lately. They have collected 9 points from the past five league outings to add up to a total of 51 points on the table. Following that, they sits 11th on the table. They will be eyeing for a top 6 spot which is currently 8 points away from them.

Bolton were last seen playing a League One fixture against MK Dons away from home. The match ended up in a 2-0 defeat for them. They will be hoping to better themselves from that negative result which came after two subsequent winning efforts from them.

Meanwhile, Morecambe have failed to deliver pleasant displays consistently in the league since the beginning. As a result they are placed at 21st on the table, which is inside the danger zone. They have a total of 31 points in hand. Their defensive lineups are not that impressive.

Morecambe have ended up their most recent league fixture in 1-1 draw at home against Ipswich. With that draw, they are on the back of 7 winless games in the league. They have also leaked goals in each of their past 9 league fixtures.

By the looks of things, we expect a satisfying display from the home outfits, Bolton when they host Morecambe in the 24th Round of League One games at University of Bolton Stadium on Tuesday.

They have only played three head to head affairs and Bolton stays unbeaten in each of those. Also, their form in the league of late is far better than the form of Morecambe so far this campaign.

Therefore, we expect a win for the hosting side at the end of this one. Considering the impressive attacking side of Bolton and the weak defensive side of Morecambe, we anticipate a good goal scoring encounter here.