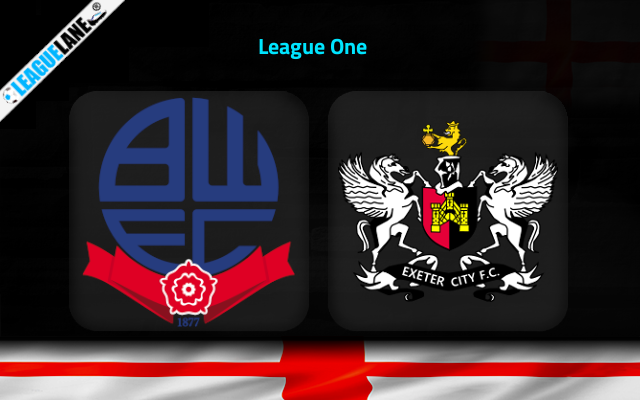 Bolton vs Exeter Predictions and Free Tips from our expert tipsters when the teams go head-to-head in the England League One on Saturday, 17 December 2022.

Bolton is at the fifth position in the table with delivering consistent unbeaten performances since the beginning of the season. They were unbeaten in 13 of the 18 games they played.

Current 12th place Exeter will be their opponents on Saturday. Exeter has shown an inconsistent performance in the last five games. Therefore, Bolton will head into this match with enough of spirits.

They have only met twice in the past. The latest meeting had finished in a 1-2 win for Exeter.

Both teams to score option have landed in all those two meetings.

Who will win the match between Bolton vs Exeter?

Bolton is currently having a decent form in the league. They were unbeaten in six of the last eight league outings. On top of that, they have only lost once once in the last seven league matches at home.

Exeter on the other side is not having a decent form on the road lately. They were winless in four of the last five road trips. In that case, we expect a victory for Bolton.

Two of the last three home matches of Bolton saw the landing of over 2.5 goals ft option. At the same time, Exeter have over 2.5 goals per game rate in their away affairs this season.

Since either sides are in possession with a good attacking side, expect over 2.5 goals ft.

Exeter scored and leaked 15 goals in their 10 away outings this season. Meanwhile, Bolton have been leaking goals consistently in the past few home fixtures.

In that case, expect goals from both ends on Saturday at University of Bolton Stadium.

Taking into account these observations, we like to back Bolton to win at 1.95 odds as the main bet for this one.

For the second tip, both teams to score seem to be an ideal option at 1.75 odds since both the sides have been allowing goals of late.