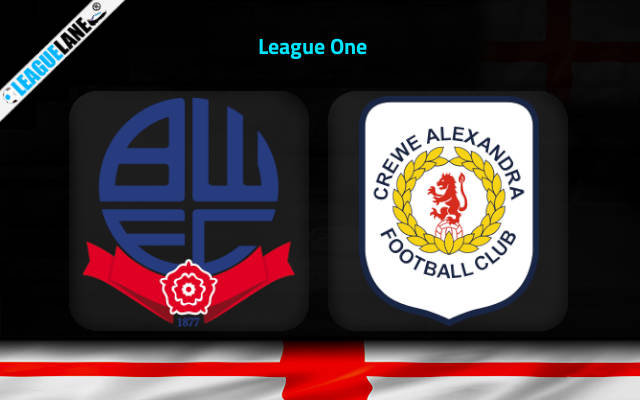 Crewe Alexandra are struggling badly to perform this season. They were even outplayed by fellow strugglers Doncaster Rovers (penultimate-placed) in a 1-1 draw at home in the previous round of the League One. Crewe had just four attempts in that game. They have conceded three or more goals in three of the last five league matches and we don’t see them pulling off a result here.

Bolton Wanderers host the rock-bottomed Crewe Alexandra in the first game of the Matchday No 17 in League One on Friday evening at the University of Bolton Stadium.

The hosts will be hoping to take advantage of such an easier fixture and get their campaign up and running with a victory over the weakest team in the division.

Bolton dropped to 16th place in the league table after a run of four defeats and a draw in the last five League One affairs.

They lacked sharpness in the final third recently, failing to find the back of the net in four of the last five league fixtures.

Bolton had just one shot on target in a 1-0 defeat at Portsmouth in the previous round.

They also failed to see off the lower-division Stockport County in the last weekend’s FA Cup tie, playing only a 2-2 draw on the home patch on the occasion.

Crewe have been even worse in the opening round of the FA Cup. They fell 0-3 at home to lower-division Swindon Town to make it five losses and a draw in the last six matches across competitions.

Crewe Alexandra are the only team in the league with a single-digit number of points as they claimed no more than 9 in 16 games so far in the season.