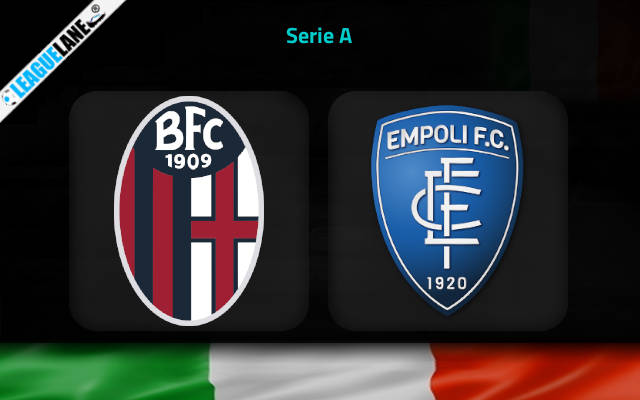 Bologna clinched their first win of the season last weekend when they completed a second-half comeback at home to Fiorentina.

Musa Barrow became the first man other than Marko Arnautovic to score a goal for I Rossoblu this term as he leveled the score just before the hour-mark against I Viola. Arnautovic then set the final score by netting his sixth goal of the season three minutes later.

Interestingly, the win came straight after former manager Sinisa Mihajlovic got sacked. The ex-Spezia head coach Thiago Motta took charge on Tuesday and he will lead the team for the first time on Saturday afternoon when Empoli come to visit Stadio Renato Dall’Ara.

Empoli are still winless in this term of Serie A. They drew four and lost two of the opening six matches of the season.

The team led by Paolo Zanetti fell 1-2 to Roma in the previous game on Monday night, finishing a streak of four successive draws on the occasion.

We have seen goals at both ends in each of Empoli’s previous four outings. The outfit shipped two goals in each of the last two clashes against Salernitana and Roma.

Could we see Marko Arnautovic extending his phenomenal goal-scoring form at the start of the season here then?

We also have to say that Bologna are unbeaten at home this term, including two wins and draws apiece if we also count the Coppa Italia success against lower-division Cosenza in early-August (1-0).

Each of three league games Bologna played at home this season saw goals at both ends. Since Empoli will enter this off of two straight Over 2.5 goals FT & Both Teams To Score affairs, backing goals at both ends looks to be the way to go here at the odds of 1.70.

We also like the home win pick at the 2.10 odds knowing about Bologna’s fine tradition in the history of the home clashes against Empoli as well as the new-manager bounce effect.