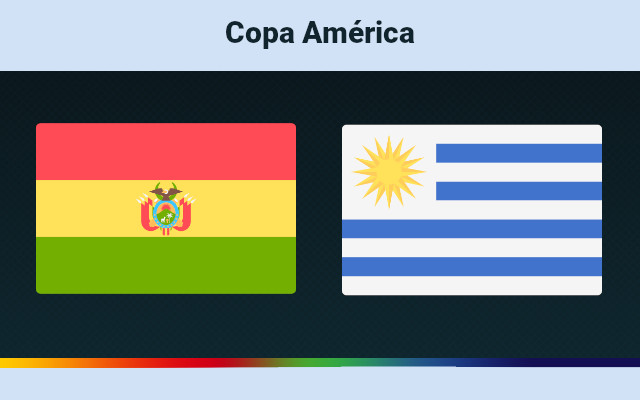 Bolivia and Uruguay battle for their first win at Copa America with knockout qualification at high risk.

The La Verde lost both games so far, to Paraguay (1-3) and Chile (0-1) and sit at the bottom of the group. The lowest ranked side in South America are at the verge of group stage elimination and their fate will be sealed with another defeat here even before playing Argentina to finish their quota of games.

Meantime, Uruguay drew Chile 1-1 on Monday after going down 0-1 to Argentina in their opening game of the group. Though their struggles and lack of team cohesion were visible in both games, created very few chances and failed to take whatever came their way.

The La Celeste are third in the standings with 1 point. With 4 out of 5 teams progressing from the group, Uruguay is still in with a chance with a draw or defeat here. But things will be complicated and difficult because they must beat Paraguay in the final group game to avoid tough opponents in the knockout phase.

Bolivia is left with 1 win from their last 10 games with 7 of them being defeats. The 1-0 defeat to Chile on the weekend if the first match since October they failed to score. There have been 12 goals scored in their last 10 but conceded 20 in return.

Uruguay’s struggle for goals was once again evident in the draw against Chile, yet they can take some positives to have drawn a strong side.

They are coming to Thursday’s game without a win in last 5 and the goal against La Roja is the only goal scored during that period, thought it was from the boots of Alex Vidal.

Uruguay have struggled for results in recent months leading up to the Copa America and they need a morale boosting win here to kick-start the resurgence.

A young team like Bolivia presents them with an excellent opportunity to do so, but the likes of Suarez and Cavani must replicate what they did for their club in 2020/21 season.

We already saw Bolivia giving away a lot of chances in the first two games, Paraguay took some of them and converted while Chile did not. Let us hope La Celeste raise to the occasion and bag a solid win on Thursday.