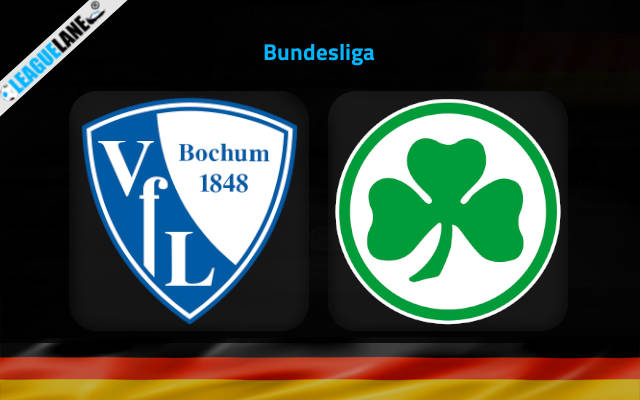 Game week 25 of German Bundesliga brings us the match between Bochum and Greuther Fruth on Saturday at Bochum.

Bochum played their last match against RB Leipzig. Leipzig scored the only goal in the match in the 82’minute while Bochum could score none. The match ended in a loss for Bochum with 0-1 FT score.

Greuther Furth played their last match against FC Cologne. In the match, both teams scored a goal each, ending the game in a draw with 1-1 FT score.

Bochum has had little luck in finding wins in their matches this season. The team has gained mixed results in their matches recently and the eight wins in the league matches have helped the team in securing their position at the 11th position on the league table with 29 points. From the last ten matches, the team has scored in six of them but could find wins in only two of them.

Greuther Furth has played poorly in their matches throughout the season. The team found in only three of their league matches totally. The team sits dead last on the league table with only 14 points to their name from their matches so far. Fruth has scored in seven of their last ten matches and found their only three wins in this period.

Bochum and Fruth are in the same position when it comes to their performance in the recent matches. Both of them have achieved mixed results in their recent matches, failing to find wins in most of them. The teams have also scored in most of their matches as well, making it more probable for both of them to score in this match.

Bochum has gained most of their wins in their home matches and has earned losses in only few matches. However, their loss in the last home match stopped the team’s unbeaten streak. Furth, on the other hand, has not produced the results they had hoped for in their away matches. The team has not won in any of their road trips this season.

Looking at the records, match is most likely to end in a win for Bochum with the match ending with over 2.5 goals.