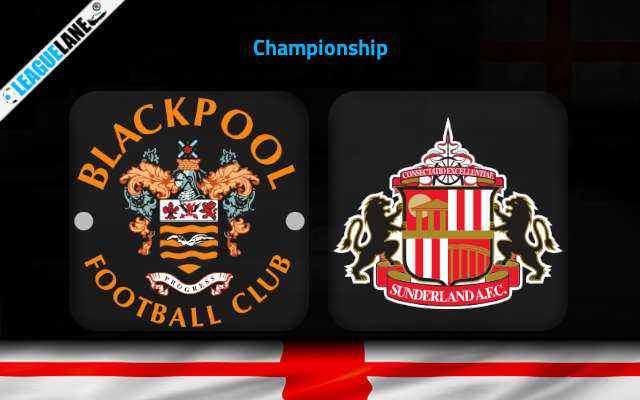 Blackpool vs Sunderland Predictions and Free Tips from our expert tipsters when the teams go head-to-head in the England Championship on Sunday, 1 January 2023.

Blackpool is having an unimpressive form since the beginning of this season. They extended their winless thread to seven games after recording a score draw against Hull in the previous match.

Meanwhile, Sunderland have been recording decent display lately. They have bagged a total of 10 points from the last five league outings and have climbed into 9th spot, just one point away from the promotion zone.

Sunderland is on a two-fixture unbeaten streak against Blackpool. The reverse fixture had finished in a goalless draw.

The latest encounter at this stadium ended in a 2-3 win for Sunderland. In fact, Sunderland won three out of the total four on the road h2h encounters against Blackpool.

Who will win the match between Blackpool vs Sunderland?

Sunderland is most likely to seal a win on Friday based on the current form of both these outfits. They will trip to Bloomfield Road on the back of a four-game unbeaten streak on the road.

Since Blackpool follows a streak of three winless home games, expect a win for the travelling Sunderland.

Going on, we expect Sunderland to have the control of this game against Blackpool on Sunday. In that case, we anticipate a match with goals over 2.5.

Blackpool’s attacking side have not scored in the last three home fixtures. Meanwhile, Sunderland have managed to record a clean sheet in two of the last four away matches.

By the looks of things, we don’t expect this Championship clash at Bloomfield Road on Sunday to have goals from both ends.

Sunderland is most likely to end up victorious on Sunday. We like to back them at 2.50 odds as the main bet here.

Although the bet price seems a bit higher, we like to go with over 2.5 goals at 2.10 odds.