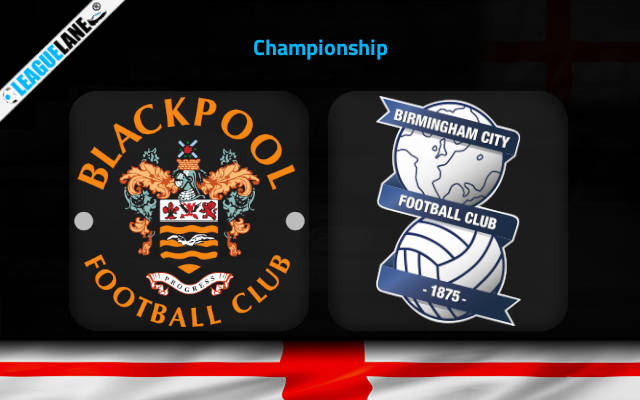 Blackpool vs Birmingham Predictions and Free Tips from our expert tipsters when the teams go head-to-head in Championship on Saturday, 10 December 2022.

Blackpool have the worst form in the league. The team led by Michael Appleton are on a four-game losing streak. The second half of the league is looking very different, now they are just three points from the foot of the table.

At the same time, Birmingham finds itself at the fourteenth position on the table. They have lost only once in their last five outings.

Both teams last met in April this year and Blackpool celebrated a huge 6-1 victory that time.

Moreover, the host are on a two-game winning streak at their home ground against this team. The visitors have won three of the last five overall head-to-head meetings.

Who will win the match between Blackpool and Birmingham?

Birmingham have a better chance to win this fixture. The main reason is that Blackpool are not the same team anymore as they were at the beginning of this season.
They have lost their winning momentum and are preparing for a relegation battle at this stage of the season.

Moreover, the visitors have won two of the last three head-to-head meetings. The host are on a two-game losing streak at their home stadium.

We can expect over 2.5 match goals combined. The main reason is that the previous record shows that in two of the last three overall meetings at least three goals have been scored at Bloomfield Road.

This fixture rarely lacks goals. Both teams have scored in three of their last four head-to-head meetings at this ground. Therefore, we expect the same trend to continue this time as well.

The visitors have an advantage as Scott Hogan is in good goal-scoring form. He has scored in two of the last three appearances. His goals helped his team win four points last month. Therefore, the first tip is that Scott Hogan to score anytime– the odd for this tip will be at 3.40 odd.

Our second tip is that Over 2.5 goals with both teams to score– at 2.37. Both teams have scored a combined total of twelve goals in three of the last four matches at Bloomfield Road.