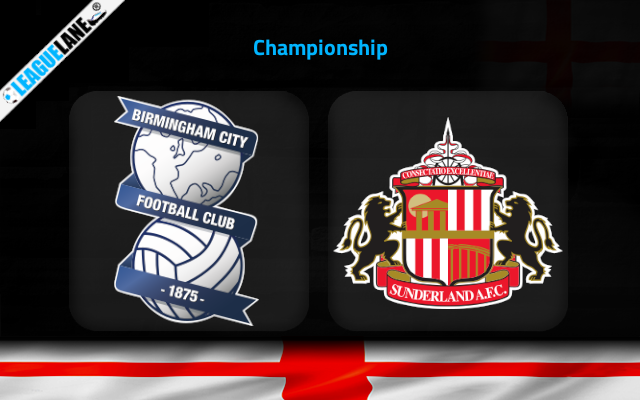 Sunderland will be the visitors at St. Andrew’s Stadium for the Friday’s Championship clash with hosts Birmingham.

Birmingham will head into the fixture off the back of a three-fixture unbeaten streak. Two of those three were positive outcomes. They bagged 7 points from those three fixtures to sum up a total of 27 points.

John Eustace’s team are currently at the 11th position in the league standings. Their defensive steel seems to have a bettered form of late. They had only allowed a total of one goal over the course of the previous three fixtures.

Meanwhile, Sunderland are on a seesaw of form lately. They were winless in six of the past eight league fixtures. Four of those eight were losses.

It is worth noting that their defensive line had leaked goals in six of the past seven fixtures. Their attacking line has been also displaying a displeasing performance lately.

Going on, Birmingham is having an impressive run at home of late. They have managed to evade a defeat in the previous five league fixtures at home. Do also note that they sealed a clean sheet in four of those five fixtures.

On the other hand, Sunderland is not having an impressive form on the road . They were winless in four of the previous five road trips. Their only win in those five games were against Huddersfield, who are currently at the bottom of the table.

All the above mentioned stats are in favor of Birmingham. Given their head to head wins and current league form, you can expect a similar trend here.

Considering all these observations, we like to back Birmingham to Win & Over 2.5 Goals @ 4.00 odds as the main bet.