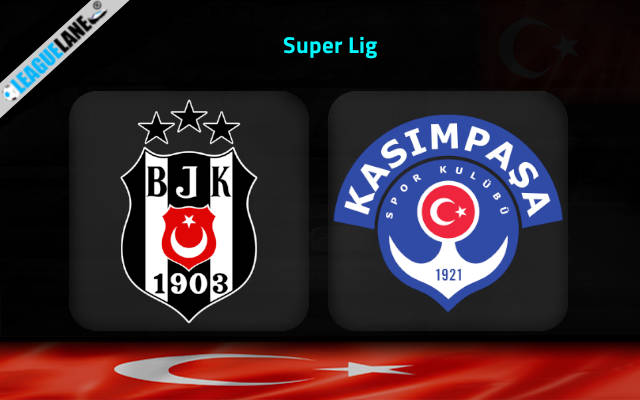 Besiktas vs Kasimpasa Predictions and Free Tips from our expert tipsters when the teams go head-to-head in Turkish Super Lig on Saturday, 7 January 2023.

Besiktas are one of the best teams in the Turkish top flight, and have been so for the past several years. They are yet to shift to top gear, but this upcoming fixture will be a great opportunity for them to gain some momentum.

Meanwhile, Kasimpasa are one of the worst in the competition, and are stuck in the relegation zone at the moment.

Over the course of the past several seasons, Besiktas have had the better record in h2h clashes – even though Kasimpasa won the most recent meetings.

At this venue, not only have the hosts delivered consistent wins, but they have scored in plenty too.

Who will win the match between Besiktas and Kasimpasa?

Besiktas are primed to secure a win this weekend at any cost. They are at home, and they have lost just thrice all through the campaign. Two of these defeats came against toppers Basaksehir and Galatasaray.

At the same time, Kasimpasa are one of the two teams in the league to have remained winless in the past five league games. They are also letting in goals in huge numbers.

Apart from toppers Fenerbahce, hosts Besiktas have scored the most number of goals in the Super Lig this season. They have also made it a habit to score in plenty in h2h meetings over the years. Anticipate a high-scoring affair.

It seems unlikely, considering the level of dominance Besiktas have shown in recent h2h encounters. They have also been one of the best defensive sides in home matches this time around in the Super Lig.

Placed at 1.67 odd, Besiktas to win is a solid choice for this weekend fixture. They are in form, and are going after a spot in the podium. At the same time, counterparts Kasimpasa are struggling to stay above the relegation cut-off.

Going on, Over 1.5 Team Goals by Besiktas is another great pick, placed at 2.00 odd. The guests are just not in the best condition to keep up a good defense throughout the ninety.